And then there’s Chinese 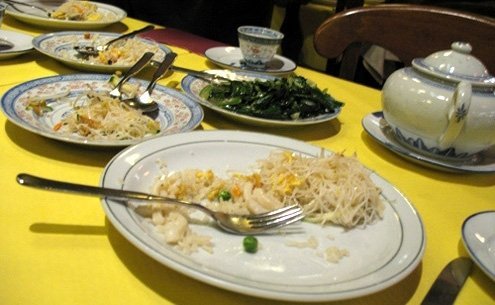 nlike New York, Paris and Barcelona, where innovation and fusion have created renowned culinary wonderlands, Rome’s place as a destination spot for foodies is dramatically one dimensional. Visitors trudging up the Spanish Steps justifiably crave the simple brilliance of la cucina romana, those heavenly platefuls of carbonara and amatriciana that hold court in the Eternal City. And Romans themselves have historically scorned intrusion from strange sauces and exotic spices, casting a suspicious eye on anything other than the home cooking. The result is a conspicuous and disappointing lack of ethnic cuisine in the capital.

And then there’s Chinese.

The oft-maligned stepsister of Roman dining, Chinese cuisine has somehow managed to survive and even flourish in every neighborhood. Near most of the major monuments — the Pantheon, Trevi Fountain and Colosseum included — sits a Chinese restaurant with its multi-lingual menu and bulbous faded red lights dangling like oversized onions.

Angela, the ever-present bright-eyed hostess of Tian Yi Jiao in Trastevere, attributes the ubiquitous Chinese presence to prices. “Japanese and Korean food are very expensive here, but Chinese food is good and inexpensive, maybe €15 for a meal,” she said. “Things have been difficult the last two or three years with the euro and so many Italians like to eat Chinese because they can afford it.”

Unfortunately, once you’re at the table, the meals can be as dull and tired as the decoration: watered down curry rendered utterly flavorless; fatty meat smothered in a ubiquitous brown gravy; gelatinous soups suffering from an overload of cornstarch. Worse still is the MSG hangover — that steady thumping felt in the side of the head that comes after an inexcusably bad meal.

Admittedly, some of the meals I’ve had were just plain bad, and other times dishes that lacked flavor seem to have been tailored to suit the eating habits of the locals. Keryn Huang, a Chinese-American who lives in Rome, explained that much of the Chinese food in the city is muted for the taste buds of Italians. “Chinese use a lot more garlic and oil, and a lot more spice in their food,” she said. “Most Italians can’t handle it.”

According to Angela, cooking for Italians is similar to cooking for the Chinese, except that Italians prefer smaller portions and insist on eating their involtini fried, rather than wrapped in fresh crepes. “People always ask me what is authentic Chinese, but China is so large that there are three, four… many types of cooking,” she added.

Some people desperate to find alternatives to the pasta bowl have abandoned their quest, too often burned by the headaches and unsavory experiences. When I told one friend about taking on the subject his response was curt: “two words. It sucks.”

So what is the discerning diner to do?

Even considering my friend’s disgruntled comment, there is delicious, inexpensive Chinese food in Rome, you just need to know where to look. After countless excursions into the culinary vortex, I’ve discovered a few bright spots that should please even the hardened naysayer. They may not take you back to Mott Street in New York’s Chinatown, but then again, you’re not in Rome for the Chinese food.

One of the oldest and most famous Chinese restaurants in Rome, Hang Zhou is hidden on a side-street around the corner from Santa Maria Maggiore. In a cluttered space filled with aging Communist Chinese propaganda and large posters of Chairman Mao, the restaurant serves authentic food from the region around Shanghai. The anatra sulla piastra con cippoline (duck on a hot plate with onions) surges with ginger and slight hints of mustard, and in a testament to the quality of duck, it is left to sizzle in its own skin rather than suffer the intrusion of a heavy sauce.

The shrimp dumplings in transparent dough, steamed and served in bamboo, are delicate and flavorful and exactly what you want in your ravioli. The house specialty, black rice, or riso d’imperatore, as Sonia, the gracious hostess calls it, is a unique and extremely nutritious dish complete with its own legend. She explained that the slightly sweet, short grained rice (also called forbidden rice) was at one time a rare delicacy reserved only for the emperor. The townspeople needed special permission to indulge, which of course was granted only on special occasions. Thankfully the ban has been lifted and we’re all allowed a taste.

I discovered Trastevere’s Tian Yi Jiao, which means “a corner of the sky,” three years ago when I visited Rome for the first time, and it has become my favorite neighborhood place, the go-to spot on a rainy night. It’s not necessarily the closest to my apartment, but it’s close enough, it’s friendly and it always seems to cure what ails you.

Filled with a mix of students and Italians getting some cheap eats, Tian Yi Jiao is the perfect place to divert your taste buds from the same old same old. The hot and sour and wonton soups are excellent and the soft summer rolls make for a healthy alternative to fried spring rolls. The tofu and vegetarian dishes are light and fresh, and the meat dishes are flavorful and sparing with the sauce. If you’re daring try the succulent cosce di rana (frog’s legs), which are coated in a light batter and fried. But without a doubt the real reason to make the trip is for dumplings, which rank as the best in town. Don’t miss the ravioli verdure al vapore and the ravioli sulla piastra; better yet, go with a group and order the entire list of five or six styles.

If you’re in the mood to explore or you happen to live in the far reaches of Prati, check out Dong Feng. After arriving on one of the coldest nights of the year, four of us enjoyed a delightful meal in a pleasant setting. The dumplings are light and fresh, the shark fin soup strikes a nice balance between tart and briny, and one friend thought the hot and sour soup was particularly delicious (“better than Hang Zhou”). The Anatra Cantonese, their version of the crispy duck and crepe stage of Peking Duck, was prepared fabulously, with enough to go around the table twice. As we hurriedly passed the plates my friend remarked, “It’s like we’re not even in Rome anymore.”

At the other end of the city, just outside Porta Pia, Grand Dragon quietly blends into the storefronts of Via Nomentana. A monument to Spartan dining, the no-frills atmosphere seems more suited to old men playing poker than groups enjoying quality Chinese food; but the food holds its place among the best I’ve tasted in Rome. The hot’n’sour, wonton and egg drop soups are superb and the pan fried dumplings rank high on the list. The duck was perfectly cooked, with just the right amount of crispiness to give it flavor, and the hot and spicy tofu (ma po dofu) and hot and sweet slices of pork (yu xiang rou si) were given the nod of authenticity by Keryn. If anything, the spring rolls were banal and the curried chicken lacked the intense flavor of a really good curry; but friendly service and the low bill allowed us to forgive all of that.

If you can’t handle the rec-room wood paneling of Grand Dragon, try Court Delicati. This restaurant serves the FAO crowd at lunch, but on weekend nights it is threatening to become a scene if it hasn’t already, so make sure to book ahead. The white walls and minimalist décor seem to actually indicate a style rather than an absence of one, and the food, although a bit inconsistent, ranges from decent to exceptional. Try the alghe fritte (fried seaweed) and croccante di manzo (crispy fried beef) as appetizers, followed by spaghetti al Singapore, a dish consisting of curried noodles with shrimp, pork, egg and chicken. This is one of my New York staples, but Court Delicati is the only place where I’ve found it in Rome. The service can be scattered and there is also a page of Thai and Malay dishes, but none of the ones I’ve tasted are memorable.