And the Band Played On 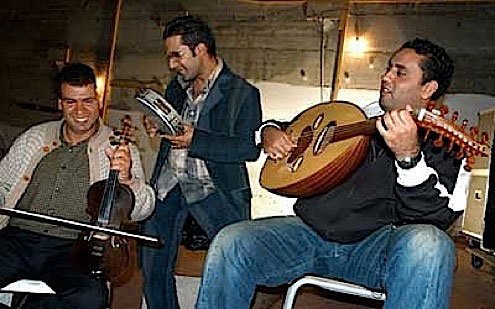 The band's members are a musical UN.
A

t an outdoor concert at the Music Park Auditorium in Rome, conductor Mario Tronco snapped his fingers, raised his palms to the night sky and manically bobbed about the stage. To his back was an audience of roughly 5,000 Italians, many of whom had surged forward to get a better look at his eclectic 15-piece orchestra. Among the instruments was an African drum, an Andean flute and an ancient Middle Eastern lute called the oud.

But that night the crowd’s focus was on the tabla, a two-piece North Indian percussion instrument, and its 21-year-old musician, Amrit Hussain, who was leading the Orchestra di Piazza Vittorio to a crescendo.

Before the evening ended, the orchestra would perform two encores, prompted by standing ovations, and Tronco would twist a calf muscle in the excitement.

Tronco sensed a bond had been forged. “I don’t know how to say it, but it’s like Rome took notice of us that night. It was as if the city said, ‘Okay you exist.’”

The encouraging reception has been much the same across Italy. The Orchestra di Piazza Vittorio has performed everywhere from peace protests in Assisi to Milan’s Palamazda arena to beachfronts of Brindisi. For many in the orchestra, the public’s embrace has not only meant recognition for them as musicians, but also as immigrants living in Italy.

Apart from its two Italian members, the rest of the orchestra is an ethnic potpourri. Senegal is represented, so are Cuba and Morocco. Recently the group wrapped up its first CD, a collection of pieces performed on a tour that L’Espresso magazine called “a beautiful social experience of tolerance and integration.”

If only the Italian government was similarly moved. Work visa snags sent Hussain and singer Mohamed Bilal, who also plays the harmonium, back to India last fall, forcing the orchestra to record without them. Now back Italy, Hussain admits that the bureaucratic gymnastics are becoming a routine performance — both he and Bilal will have to return to India again in late April when their latest visas expire.

“They’re checking to see if these two guys are really musicians or if they’re illegal immigrants,” Tronco said, noting that public performances documented in newspaper clippings had failed to impress authorities.

Tronco himself is a recognizable figure in the Italian music world. He is best known as the pianist and songwriter behind Avion Travel, the band that won the San Remo song contest in 2000. Last year, Avion Travel released their latest CD, Poco mossi gli altri bacini, on which Tronco collaborated. He formed the Orchestra di Piazza Vittorio in November 2001, shortly after moving into his loft apartment over the Piazza Vittorio Emanuele, in the heart of Rome’s most ethnically diverse neighborhood. The idea for a multi-ethnic orchestra came from the music Tronco regularly heard trickling through his window from the street below. Whether live or recorded, Tronco began tracking the music to its source, approaching street musicians, frequenting clubs and restaurants, posting want ads on the internet and even making cold calls.

Houcine Atta, the orchestra’s lead vocalist, recalls the first time he spoke to Tronco. “I’d never heard of him,” said Atta, who at the time was singing at Middle Eastern clubs and restaurants around Rome, a world apart from glittery San Remo. “He called me up and said, ‘It’s Mario Tronco,’ and I said, ‘So what. Who’s Mario Tronco?’”

What followed was a proposition to form a Rome-based orchestra of musicians from as many countries as possible. Tronco wanted Atta, the fourth generation in a family of male Tunisian singers, on board.

Flautist Carlos Paz, who fled his native Ecuador 11 years ago, fearing persecution for criticizing, alongside other musicians, the then government, had only seen Tronco on television when Avian Travel triumphed at San Remo. “Sure I watch San Remo,” Paz said. “I’m a musician and this is Italy, so I watch and listen carefully, critically.”

After two months in Moscow (“too cold”), followed by two years in Austria (“too intolerant”), Paz landed in Italy, where he found work at a few nightclubs just as Latin American music was catching on. Paz also played the piazzas. It was in Piazza Barberini, in fact, that he met Tronco. Paz had been improvising on one of his handmade Andean flutes when the man he’d watched on television approached. “He didn’t have to convince me,” Paz said. “I was already enthusiastic.”

These days, Tronco spends considerable time thinking up ways to cut through Italy’s red tape and reconfigure the orchestra when Hussain and Bilal are absent — the upcoming visa lapse means they won’t be around for an April tour to promote the new CD.

“You’re waiting for people to finish their vacations, people are saying you need this document instead of that document, and by the time you finally get to the questura with the papers proving our musicians don’t have criminal records, there’s the investigation that’s yet to be launched, which of course takes at least fifteen days,” Tronco said.

Some orchestra members are surprisingly understanding of their host government’s actions. Ziad Trabelsi, a Tunisian who immigrated two years ago, said he empathized with his colleagues, but admitted that government scrutiny, while inappropriate in this case, wasn’t unfounded overall. “No one comes to Italy to stay in Italy,” he said, while strumming his oud, a Middle Eastern pear-shaped lute that predates its western counterpart by at least 1,000 years. “You come to get documents, then you go to another country.”

But Trabelsi and the rest of the orchestra are staying put. At a concert the group taped for a forthcoming documentary, Paz took his place, center stage, in front of Tronco, still walking with a crutch. Bilal and Hussain hadn’t returned from India yet, so Paz sang backup to Atta in Arabic while the orchestra’s string trio improvised an acoustic riff or two on the violin, viola and cello to compensate for the missing tabla. And then there was the usual melding of jazz bass lines with Middle Eastern folk melodies and Latin and African drumbeats, which stirred the audience to rhythmic clapping and cheers.

Before the show ended, Tronco raised his crutch like a pointer to introduce the members of the orchestra by name, instrument and country. One by one members ranging from Abdel Majid Karam on the gambri from Morocco to Giuseppe Pecorelli from Caserta, bassist, took their bow. Then Tronco directed the audience’s attention to the vacant spots near the foot of the stage. “Amrit Hussain, tabla, and Mohamed Bilal, harmonium, from India,” he belted, adding, “That’s where you’d usually find them, right here.”