And the abyss deepens 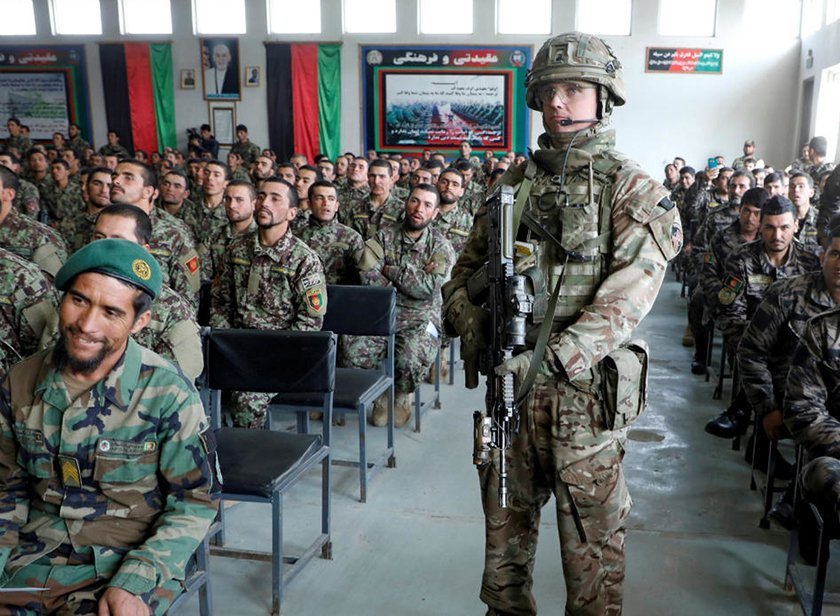 Despite extensive assistance from the United States, Afghan forces have yet to be able to fight effectively against the Taliban, let alone defeat them.
T

hings are bleak in Afghanistan these days, bleaker perhaps than they have been in quite some time. Given the relentlessly bad news that tends to emanate from Afghanistan, that is saying something. Every country invested in the cause, not just the United States, is grappling with what to do about it.

It is in vogue to say that there are no good options. This is true, but the phrase no longer suffices. The U.S. and its allies now find themselves in a tangled web that leaves almost no escape — good or bad.

For starters, it should be clear by now that the U.S., along with its Afghan partners, cannot defeat the Taliban militarily. They’ve been trying for 18 years now, with little to show for their efforts. In the heady days immediately following the country’s October 2001 invasion, it seemed like the United States had the Taliban on the run and that its demise was imminent. When the U.S. committed over 100,000 troops to Afghanistan in 2010, the end seemed to be in sight. When the death of Taliban founder and leader Mullah Omar was announced in 2015, most assumed the Taliban would disintegrate. In each of these instances, the hope was that the war would end shortly. On each occasion that hope proved unfounded.

Throughout all the years and despite all the efforts undertaken against it, the Taliban has responded with remarkable resilience, so much so that even now it remains a potent and formidable lethal force. By most estimates, the Taliban controls more territory than at any time since 2001, nearly half the country. In addition, civilian deaths are surging. According to the U.N. Assistance Mission to Afghanistan, more civilians died or were injured in Afghanistan between July and September 2019 than any other three-month period over the last decade. The vast majority of these casualties can be attributed to the Taliban, which continues to purposefully target civilians to further sow domestic instability. The inescapable conclusion is that the Taliban is not going away.

Clearly, the U.S. cannot trust the Taliban to engage in good-faith negotiations. Washington has of course never actually trusted the Taliban at all, but recent events have laid bare just how duplicitous and treacherous the group remains. In the midst of negotiating a peace deal, a long-stated goal of the political wing of the Taliban, the military wing was actively undermining the very pillars on which a potential accord could be built.

The U.S., along with its Afghan partners, cannot defeat the Taliban militarily.

Throughout the negotiations, the Taliban continued carrying out terrorist attacks, mostly targeting the domestic population but also often hitting U.S. interests. To its credit, the U.S. stuck to the negotiations, but the actions of the Taliban did little to inspire confidence that a halt to the violence would be forthcoming. Similarly, the group continued to use civilian hostages as leverage to press for the release of its own captured commanders.

It is one thing to demand a prisoner swap when both sides hold enemy combatants. It is quite another to demand it when you are holding civilians. At the moment, the Taliban are holding two professors from the American University of Afghanistan, both foreigners who are dedicated to the idea of a prosperous Afghanistan. Even more egregiously, the Taliban remains in cahoots with al-Qaeda, the terrorist group primarily responsible for the Sept. 11, 2001 attacks in New York City and Washington. Just days after the collapse of peace talks, the U.S. carried out an operation targeting al-Qaeda militants hiding out in a Taliban compound. By most accounts, the two groups remain intertwined at a variety of levels. Given that breaking with al-Qaeda is a core U.S. national security interest, this continued cooperation is problematic to say the least.

Complicating matters further is the Afghan government’s inability to secure its own country. It is a government that struggles to maintain peace and security. Thankfully, presidential elections held in late September saw only minimal violence. However, Afghan security officials themselves admitted that the level of effort required to secure the country for just one day was unsustainable. The Afghan government is simply unable to keep up such efforts in the daily battle against terrorist factions. And crucially, the government, still associated with broken promises and corruption, does not yet enjoy the support of the citizenry (nor does the Taliban).

This conundrum in which the United States finds itself — it cannot “win” over or trust the Taliban, and neither can it rely on Afghan security forces. The option of packing up and going home is also unavailable, as doing so would risk al-Qaeda re-establishing a safe haven from which to attack the U.S. homeland. This all begs the question of just what the U.S. should (or can) do.

It boils down to holding the Taliban accountable and suffocating its ability to continue operations. The solution to this is not easy, but, as with many issues, it begins and ends with money.

It boils down to holding the Taliban accountable and suffocating its ability to continue operations.

Estimates vary widely, but it is reported that the annual operating budget of the Taliban is somewhere between $500 million and $2 billion. This staggering sum is derived from a variety of sources, including trade in illicit drugs, smuggling, extortion, foreign remittances, and even indirectly from the United States itself. These funds allow the Taliban to sustain its operations and spread terror and fear throughout the country. The money also allows the group to exert influence, bribe government officials, and to go on murdering and marauding. Beyond the matter of weapons or jihad aims, cutting this vast budget should be what most concerns U.S. officials. As long as it flows in these quantities, the Taliban will certainly continue to operate.

Cutting this funding is a monumentally impractical task. The cash comes from a variety of sources, many of which are hard to track.

At the same time, funding on this scale requires sophisticated financial networks to store, access, and move. These networks are a weakness, leaving the Taliban vulnerable to outside sleuths.

For now, the U.S. should take a four-pronged approach:

Only then can the U.S. begin to untangle the Afghan web of no escape.