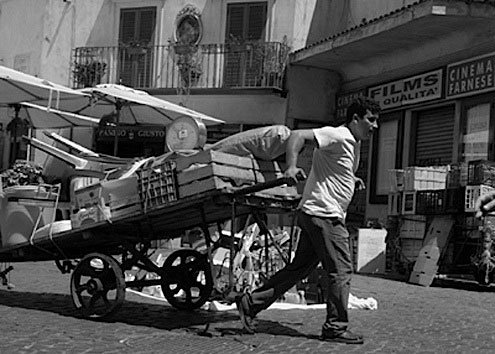 Ennio’s world, built for (but in contempt of) the aging Christian Democrats elite, was both fastidious and clever — like that of the politicians.
M

auro, says Ennio, has too many cars. “Why does he need them all?” he asks me.

I don’t know. Or maybe I have a hunch.

Ennio owns a restaurant I have visited for 35 years and Mauro is his son. The names have been changed to protect the wealthy.

Mauro, told about the car comment, finds it funny. So, to him, is his father — a gentle anachronism. His father is now officially an old man, he says.

Ennio is 76, though his rich tufts of silver hair make him look 15 years younger.

When I was young in Rome I understood nothing but that the country was run by a geriatric generation of Christian Democrats who considered septuagenarian status a basic requisite for full entitlement.

As a beginning journalist, I would lament the ages of these aloof politicians to Mauro (who is younger than me).

He would nod graciously while pointing out that he had more poignant problems.

He was dating a brunette but had fallen in love with a blonde. “What should he do about the blonde,” he asked? Marry her, I answered half-jokingly. He did. The brunette was unhappy for some time after.

In those days — before Thatcher, before Reagan, when the worst but unspoken atrocities were in Argentina — no one had mobile phones.

There was no European boom. There was no conspicuously evident materialism (barring the occasional Ferrari.) “Cool” objects — phones, pods and headsets — were less demanding of attention. All I remember, and it was tedious at times, was debate. Nothing was either black or white; terrorism, like pasta recipes, was debated.

“I had only four cars in my life,” says Ennio. “Why does he go through four in a year? And his wife, she goes through another four. What’s got into them?”

Ennio willed the restaurant into success. He worked hard. The project hit turbulence in the 1980s. The city challenged the sprawl of outside tables. Ennio persevered. But as the restaurant grew up, so did Italian society. In fact, so did Europe.

Ennio’s world, built for (but in contempt of) the aging Christian Democrats elite, was both fastidious and clever — like that of the politicians. Cheating was the rule, but to cheat effectively also meant not to show it off obviously.

In that sense, I tell Ennio, Mauro and his cars represent transparency. He can demonstrate his social ascent.

This is new territory for an Italians and their contemporary offspring. European society, whose true Baby Boomers — Miracle Economy Kids — came not in 1945 but 1970, is only now fully recovered materially from the war that stalled it in the middle of the last century. The world’s deeper complications are elsewhere, in the United States, which is strong but inner-mired; in the Middle East and Mesopotamia, whose instabilities are menu items; and in Asia, which nervously eyes, and kowtows to, China.

Mauro’s generation — late 30-something’s and younger — can’t have enough things. Gadgets assuage them, fill their days, define status. Restless, they traffic in provisional reassurances. Post-modern individualism is faith in dashboards and keypads. When aspiration loses its context buttons and displays are literally handy.

“You understand,” says Ennio, his restaurant swelling with customers who have parked their cars three tiers deep into the boulevard, “I have no problem with cars. I just don’t understand why it’s a new one every few months.”

Then Mauro’s blonde appears, stylish in winter. Mother of three, she speaks to a table of similarly stylish young women. They are posed tapestry of costly elegance, stunning nonetheless.

What I say next surprises even me.

Times change, I tell Ennio. Affluence is intense and distracting. Gadgets are involving. Quiet is unfashionable. Mauro is firmly in his century. And there’s no going back.