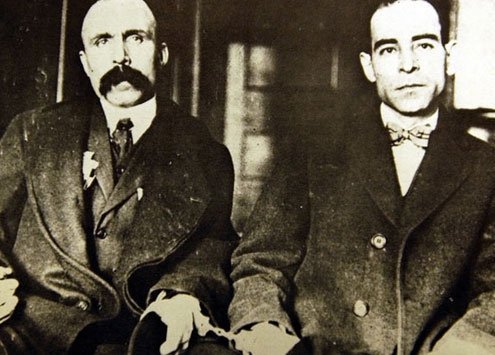 or many in America it was the Jazz Age, the Progressive Era, the flapper and rum-running Roaring Twenties of unholy prosperity via F. Scott Fitzgerald’s Gatsby dream. But for ardent anarchists like Nicola Sacco and Bartolomeo Vanzetti the United States of the 1920s evidenced a far starker side. For them, as historian Howard Zinn would later write, “the noble words inscribed above our courthouses, ‘Equal Justice Before the Law,’ have always been a lie.”

The Sacco and Vanzetti case touched the American collective conscience like nothing else between the end of the World War I and the onset of the Great Depression. Charged with the double murder of a paymaster and a security guard during a 1920 bank robbery in South Braintree, Massachusetts, the Italian anarchists endured two trials and five appeals that stretched over most of the twenties before Superior Court Judge Webster Thayer sentenced them to death by electric chair. They were executed in August 1927.

Though Sacco, a family man and shoemaker, and his fishmonger friend Vanzetti, whose letters and speeches reveal a poetic sensibility, were charged with murder, Thayer’s focus was always on subversion. A Dartmouth alumnus and former newspaperman, Thayer loathed defendants from the start (after denying them a new trial in 1924, he boasted: “Did you see what I did to those anarchist bastards the other day? I guess that will hold them for a while!”)

On the other side, tens of thousands defended them, insisting the trial and courtroom atmosphere had been poisoned against foreignness and radicalism. The Sacco-Vanzetti Defense Committee raised more than $300,000. Author John Dos Passos joined, as did Dorothy Parker. The two were arrested during defense rallies. Nobel Prize winning French playwright Antole France denounced the verdict. Even Italian dictator Benito Mussolini was said to have made diplomatic inquiries in an effort to stay the execution. After their death, protests broke out in Geneva, London, Paris, Amsterdam, Tokyo and Johannesburg.

Though Sacco and Vanzetti remain the most famous “anarchist bastards” in U.S. history, the seeds of Italian anarchist movement had already taken American root by the time the men were hustled through Ellis Island in 1908 (a coincidence, as they would not meet until years later).

Sacco, from Torremaggiore on the heel of Italy’s boot, and Vanzetti, from Villafelletto in Piemonte, were among the second great wave of Italian immigrants who made landfall in the U.S. between 1900 and 1920. The godfathers of the Italian anarchist movement had arrived among the first wave. Most were peasants and workers with few prospects in post-Risorgimento Italy.

Men like Carlo Cafiero, Francesco Merlino and Pietro Gori, already renowned anarchists in Italy, gave life to the fledgling movement, with Cafiero founding the Gruppo Anarchio Rivoluzinario in 1885. The group gained momentum after the 1886 Haymarket Affair in Chicago, a clash that left eight police dead and saw four anarchists convicted for murder and hung.

Cafiero’s group inspired the swift proliferation of other radical associations. To gather their respective flocks, radical patriarchs often embarked on propagandized, cross-country speaking tours. Gori, a fiery orator from Messina with a carnival barker’s gifts, wooed converts to anarchy by strumming songs on his mandolin.

The Italian anarchists were garment and construction workers, stonemasons and cobblers. They financed, printed and circulated an impressive canon of radical literature (newspapers, journals, books, pamphlets, poems, and even plays) despite working brutal hours in factories, quarries and mines. By 1895, thousands of Italian anarchists were active in the United States.

Most were dedicated to Luigi Galleani. A magnanimous orator trained in law, Galleani was also a militant rebel-rouser whose propaganda intensified the first American Red Scare, which flared up immediately after the Bolshevik Revolution, and helped produce the so-called Palmer Raids, a three-month Justice Department crusade led by Attorney General Mitchell Palmer to arrest and deport radical leftists, especially anarchists.

In 1902, Galleani had made a home for himself among Carrara marble workers who had settled in Barre, Vermont. For the next 15 years, he edited Cronaca Sovversiva (“Subversive Chronicle”), an anarchist journal that unabashedly denounced businessmen and government officials. He declared war against the U.S. government, incited strikers to riot and inspired Italians to dodge the draft and head for Mexico during World War I.

He also wrote a bomb-making manual, La Salute è in voi! (Health is in You!). It may have come in handy. On Sept. 16,1920, a bomb planted in a horse-drawn wagon detonated across the street from the J.P. Morgan Bank on Wall Street, killing 38 people. The Galleanists were blamed.

Though no evidence exists to implicate Sacco and Vanzetti in any bombings, they were faithful Galleanists. They attended all the meetings, lectures and festive holiday picnics organized to collect funds for Cronaca Sovversiva.

They participated in strikes, acted in anarchist plays, sat out the war in Mexico, and distributed literature in the Galleanist spirit. In fact, when the men were arrested for the South Braintree murders, Vanzetti was carrying a pamphlet that read:

“You have fought all the wars. You have worked for all the capitalists. You have wandered over all the countries… Have you found a piece of land where you can live like a human being… on this theme, the struggle for existence, Bartolomeo Vanzetti will speak.”

Vanzetti never made his lecture, but he spoke on behalf of the struggle until the end. “I have suffered for things that I am guilty of,” he read in his final statement before his execution. “I am suffering because I am a radical and indeed I am a radical, I have suffered because I was an Italian, and indeed I am an Italian… but I am so convinced to be right that if you could execute me two times, and if I could be reborn two other times, I would live again to do what I have done already.”

In 1977, on the 50th anniversary of their execution, then-Massachusetts Gov. Michael Dukakis issued a proclamation in English and Italian that Sacco and Vanzetti had been unfairly tried and convicted and that “any disgrace should be forever removed from their names.”