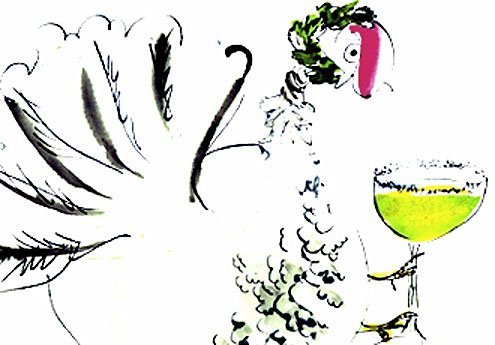 Memories of Texas Thanksgiving past.
O

I am not religious, never have been. I don’t particularly like turkey, except for the marvelous dressing my mother made the day before and which disappeared magically each November into the deep cavern of yet another enormous bird. The outside of the stuffing turned crispy and golden as the turkey cooked. You could snack on the dressing for days, even weeks after. All it took was a little gravy to warm it up.

Our giant bird carcass was competition for the loaves and fishes of the Bible. It could transform into sandwiches made on homemade bread with mayonnaise and cranberry relish or a rich turkey soup to end all soups; or it could be a concoction of turkey meat, vegetables, a little rice and a dash of white wine that kept winter at bay and sustained us for the Christmas holidays to come.

A Texas Thanksgiving (Texas is my birthplace, though these days I don’t mention it often) was always full of raucous relatives: women from six to 60 baking cookies, pies, and savory breads. There was always someone at the bar putting together a mean milk punch laced with Wild Turkey bourbon (milk, sugar, nutmeg, and a large jigger of bourbon for each serving — presented cold). There were myriad children chasing after one another into and out of the kitchen until they were banished to the backyard or told to “go out in the street and play!” And there were maiden aunts who clucked over them all and spoiled them rotten.

After dishing out the slices of moist bird — with little mounds of mashed potatoes hollowed out with the back of a ladle to catch the gravy, numerous side dishes of green beans, asparagus, carrots, tiny white onions in cream and the essential cranberry jelly — the surfeited uncles would arrange themselves on various couches like giant hens on nests to sleep off their culinary feat, snoring and snorting to amuse the children who continued their after-lunch antics by prodding overfull stomachs and lifting eyelids, until one of the uncles, like a great whale, rose up threateningly from his warm cushions with a roar, and the children, screaming in delight, raced for the yard again.

As for the banquet itself, there was always and ever the aforementioned famous cornbread dressing, which my mother also made at Christmas as a gift to our friends. The cranberry sauce was often spurned in favor of a sizzling hot pepper jelly that could blow your socks off with its pinch of habañero or peperoncini.

Pumpkin pies were festooned with roasted Texas pecans and made light by folding in egg whites instead of mixing ingredients all together “in a clump,” as my mother used to say (she subscribed to Gourmet magazine in the 1940s when any other woman in Texas thought tuna casserole was like a dish from Taillevent and petits pois were called petty poys).

And so I offer you our family’s version of The Turkey, The Dressing, The Pepper Jelly, The Mashed Potatoes, The Gravy, and The Pecan Pie (walnuts will do, since pecans are elusive in Italy — you’d have to order from Georgia or Texas to get the real thing), and whether you believe in a higher being or not, you, no doubt, can find many things in life to be thankful for.

Living in Italy, for one, and friends with whom to share your special holiday.

A turkey is preferred but capon may be substituted

• Choose a large enough, deep enough pan for your bird and hope it fits your oven.

• Have ready a liter of chicken broth for basting and for the gravy.

• Fold a long sheet of foil in half, crease it again in half to make a thick “tent” for your bird’s bosom. This will keep it from drying out. Keep this over the bird during roasting, except for the last 20 minutes. Or do as my grandmother and mother did: soak a piece of thin cloth in melted butter and drape it over the breast of the bird. You will always have tender breast meat if you do either of these things.

Sprinkle your bird with paprika when you take off the foil. This will give it a lovely color without changing the taste.

• Slosh in about 3 cups of chicken broth and 2 cups of vino bianco each time you baste to keep the dripping from sticking to the pan. When the turkey is done, remove it from the pan to a serving plate. Heat the drippings in the pan and add 2 tablespoons of flour, scraping it into the drippings to make a thin paste. Cook for a minute, then add more broth and a little wine. Cook until thick and serve with the turkey.

• Let the bird rest before carving. A large bird needs about 10-15 minutes to gather itself up and be ready for the knife. You will lose less juice from any meat, fish or chicken if you wait a few minutes after cooking and before serving.

In a mixing bowl, mix the dry ingredients, then beat the egg with the milk and oil and add to the bowl, stirring just to moisten.

Melt the butter in a 10 inch skillet that can be used in the oven, add the chili powder and sauté for a minute to toast the spices. Add the batter to the hot pan and bake for 20 minutes, or until golden brown. Break up cornbread in a large bowl to dry out for a day or two before making the dressing.

Sauté onion, celery, garlic parsley and sage in butter or oil. Add to broken cornbread along with stock, eggs and buttermilk.

1 cup heavy cream or milk, if you prefer

Salt and pepper to taste

Drain the potatoes, add the rest of the ingredients and beat well, leaving a few small lumps of potato for interest.

This makes a beautiful red jelly, perfect for holiday gifts. Never make on a wet day as it will not jell. The moisture in the air makes it sticky. I sometimes have to cook mine twice. For syrup that is too thick, add a bit of water or vinegar; for jelly too thin, add more sugar and an extra package of pectin.

2 packages pectin (I have seen this in large Italian supermercati)

PUT PEPPERS in food processor with vinegar and pureé. Pour into strainer and push all liquid out of pepper mixture. Put the liquid in a large pot with steep sides along with sugar and salt and stir to mix. Bring to a rolling boil.

Add the pectin all at once and bring to boil again. Boil for 1 minute, then take a spoon and lift some jelly mixture out of the pan, pour it out of the spoon and watch to see if two streams of jelly come together to make one thread of liquid.

The jelly should be thicker than when you started but thinner than caramel, for example. When the two threads of jelly make one thread, the jelly is ready to pour into glasses. You can test a bit of jelly on a flat plate in the refrigerator for about 10 minutes to see if you were successful. Or, better still, if in Rome, go to Castroni on Cola di Rienzo and buy cranberry preserves in a can.

For a buttery, short crust, perfect also for Tarte Tatin:

PUT THE FLOUR, butter, shortening, salt and sugar into a food processor and pulse 6-7 times, or in a large bowl, cut the butter and lard into the flour with two knives or a wire whisk.

Add most of the ice water and pulse only until you have kernels of dough about the size of a large pea. Add a few drops more water if the dough looks dry, but it should not be wet and sticky. Turn the dough out on a hard surface such as marble or formica and quickly form a flat circle. Mix the dough with the palm of the hand with a few quick pushes, then form again into a flat circle and wrap in plastic wrap. Put into a plastic bag and refrigerate for 30 minutes.

Roll the dough out into a circle slightly larger than your pie tin, trim edges. Line the dough with foil and place beans or pie weights inside the foil. Bake at 210 C for 15 minutes. Remove the foil and beans and cool.

Or, buy a ready-made pie shell.

Dash of bourbon or brandy

BEAT EGG YOLKS with molasses, sugar, bourbon and spices. Add pumpkin and cream and mix well. Beat egg whites, stir half into mixture, and fold in the rest. Pour pumpkin mixture into shell and bake for 15-20 minutes at 210 C or until just set. Let cool before serving.

And don’t think about calories on Thanksgiving! It’s only one day a year after all. Enjoy it.