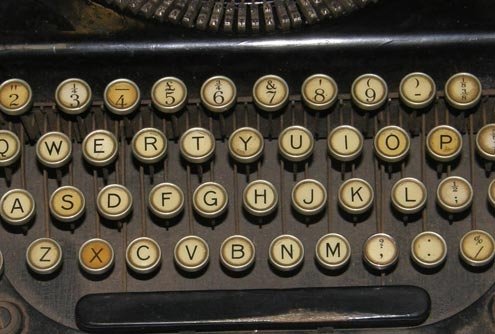 The keyboard and machine remained static for a century.
H

andwritten and typed letters are disappearing. New technologies have largely blotted out public dependence on their use.

That alone is no surprise since posted letters just contained messages that for centuries could only be transmitted and delivered if bundled up in a specific way. Unlike today, no indirect human transmission was instant, none was available to hacking (aside from wartime censorship), and all came at a cost to the sender.

Many bygone-era letter writers would likely have turned to online communication had such systems existed. But they didn’t. Mail was the only snail anyone knew. Senders could only guess how long a letter would take to arrive. Until the early 20th-century, they took months, which later became weeks, and finally a week or less, depending on the destination. Overnight delivery didn’t appear until the 1980s.

This pacing also tied letters to a specific set of ethics and assumed a private understanding between sender and recipient. The sender knew, for example, that what he wrote was unlikely to be shared publicly, unless that was his intent. He or she also knew that the more was written, the more it weighed, and the more it cost. This helped encourage terseness, which later carried over into 20th-century journalism.

Contents and their context were also different. Before phone communication, the recipient of a letter had could not know if the sender had changed their frame of mind in the interim. Nor was the recipient in a position to reply with an immediate yes or a no, agreement or disagreement, pledge or promise. Response time watered down urgency, often emphasizing tone, persuasion and personality.

Messages and saliva, stamps and envelopes, heavy paper and thin, simmered in the postal service blenders of hundreds of states. Some countries picked up and delivered mail more efficiently. A few of them — Italy among them— were thought of sloppy.

Telegrams, which allowed for abbreviated urgency at high cost, were the staid and intimate Twitter of their time. But few could afford long ones, and many agencies put a cap on length. Letters, unlike today’s emails, rarely saw much in the way of abbreviation, since clipped sentences risked ruining the point of writing at any length.

How much, and in what way, instant communication has changed the premises of what people write to one another has yet to be determined and may never be fully understood (though handwriting itself is imperiled). The difference between immediately received sentences and those prepared knowing they would tarry can seem, in subtle terms, like different languages.

This column exists to hark back to letter-writing days by offering examples of old correspondence, some of it the public domain, others more private, as well as to offer essays that depend on memories that in our view reflect the intimate cadence of “enveloped” prose. One month we may publish a essay memoir while in another we may underscore a letter.

For most correspondents in the pre-web age, letters, particularly hand-written ones, conveyed the kind of intensity that a telephone conversation, seen as the vulgarity of its age, could not match. Many letters in fact followed unsatisfactory or choppy telephone calls. Even when the typewriter was introduced, many continued writing longhand, a concept that for some is now archaic.

Whenever possible in the case of letters, this column will present scanned copy of the original text — or portions of it — and a bit of the history behind the words or exchange. ”

The purpose of “Auld Lang Syne” is threefold: to recall the less ephemeral era that preceded personal computers, text messages, pad and online communication; to present content that amuses and entertains; and, with any luck at all, to inform.