An essay for Pete’s sake 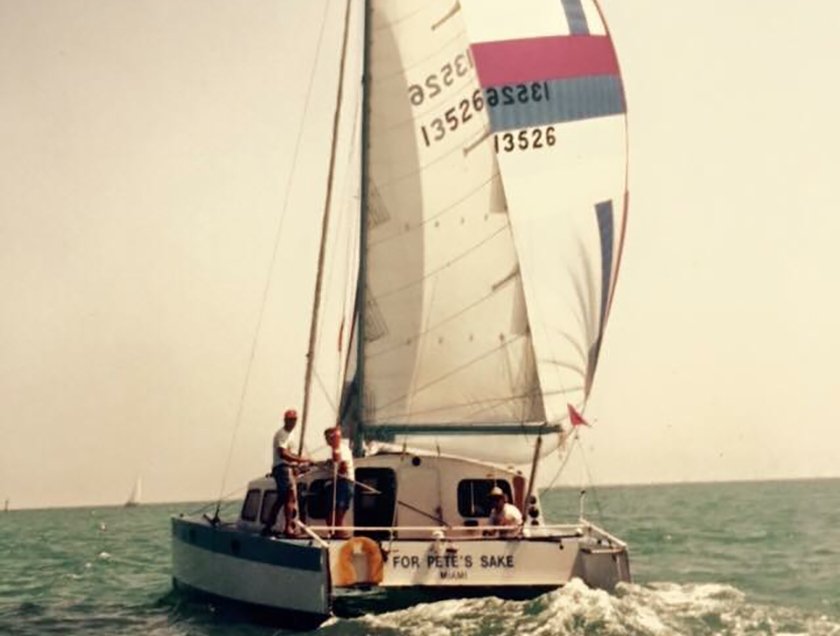 The author's father Pete (right) on the beloved "cat" he built from scratch.
M

y father has been dead for three years now. He died at the age of eighty-one of a stroke in South Carolina.
Lately, though, he’s come up often. More than ever, I’ve talked about his life and times to my brother and sisters. The talks have helped me re-evaluate my feelings toward a complex and difficult man.

It’s been a strange time. Lately, I’ve been hit by moments of awareness or realization that have made me want to talk to him and tell him what I’ve been feeling. 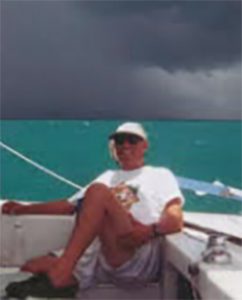 Pete Schweers, relaxing at the helm of the catamaran he built, “For Pete’s Sake.”

Given all this, it shouldn’t surprise me that twice last week specific smells began to come to mind.

The first was a light and subtle — a blend of salt air and beer that tickled the hairs of my nose and disappeared almost as quickly as it came. This came when I was nowhere near water, let alone the Atlantic coast or the Gulf of Mexico (I live in Florida).

The second was the sizzling funk of a cheap cigar.

But both smells instantly triggered the memory of my dad wearing a sweaty T-shirt and white painter pants amply speckled with fiberglass, resin, and paint. This is how he looked while working on the sailboat he was building in my aunt’s backyard in southwest Miami-Dade County, unfazed by the hot sun.

The backyard was really more of a field full of scrub palms, sawgrass, and stones of all sizes. It covered a full acre behind a concrete block ranch house, pool included, with a sprawling St. Augustine lawn with avocado and key lime trees. There was also a white horse — I don’t recall its name — with a white mane and a gauzy white tail that had the look of spun silk. Along with the horse was a silly white goat named Casper. The friendly goat.

The boat materialized slowly, the work pushing into my college years. Over time, the walls of the split hulls were glued and braced together, meeting at dagger points at either end. These hulls were connected by heavy eighteen foot beams. After that came the upper structure and cabins.

We’d occasionally hide from the sun in the shade afforded by the space between the two hulls, my dad at times lighting up a cigar to keep the mosquitoes at bay. We’d drink beer while mixing resin, then pouring the slop before laying the fiberglass matte.

The boat was a thirty-two foot long catamaran, or “cat”, designed by my father and a man named Don, his sailing and boat-building partner. Theirs was a friendship that predated my entrance into the world. The boat’s design was based on their joint obsession with sleek, fast-sailing multihull craft, from tiny racing “cats” to giant cruise vessels that could circumnavigate the globe.

It was a literally sticky business, with the fiberglass threads soon glued to our fingers, floating up into our hair and ears and sneaking into our clothing. When the boat was ready, my dad hired a semi-trailer to lift it clear. This began its trip to the seaside, some ten miles away over roads and highways.

Christened “For Pete’s Sake”, after my father, the Pete in question, she instantly became a family centerpiece. There were weekend trips to Elliott Key in Biscayne Bay and longer excursions to Islamorada, Key West, and the Bahamas. Blistering days at anchor were relieved by deep dives into the cool ocean. At night, we’d wrap ourselves in blankets and stare at the endless carpet of stars. Every now and then my old man would light up a stogie and the aroma of burned tobacco would drift into the air around us (no doubt about the source of that memory).

But it wasn’t all so idyllic. Plenty of times we ran aground on sandbars, using the anchor lines to pull ourselves free. Once, we sailed from the ocean to the bay through a mangrove-choked canal full of mosquitoes. Eventually he stopped smoking, and then gave up drinking. The bottles of single malt I’d bought him for his birthday or Christmas stood unopened in what passed for a liquor cabinet in the condo he shared with his third wife. But things went downhill. He reached a point where he couldn’t climb onto the boat or down into the hold, his knees too creaky to scramble around as he once had. So he sold the boat.

I wrote a eulogy filled with mentions of sailing, with plenty of lines about yardarms and safe harbors and sunsets.

Heart surgery nearly killed him, pushing him into a coma for a time. He came out of that but was never the same. He needed a walker and could barely walk the flight of stairs to the condo. The two of them talked about moving. As it was, the condo was full of photos of sailboats and beaches, models of lighthouses, barometers and compasses and other nautical gear. Finally, they bought a house in South Carolina, closer to his wife’s daughter and kids.

A week after the moved, he died. He was sitting on the little concrete slab that passed for a back porch in their new place, suffered a sudden stroke, and was brain dead before the ambulance reached the hospital. His widow kept him on life support so as many of his children as possible could come and say their goodbyes. We gathered around the bed, told the nurse to turn of the respirator, and I held his hand and talked him into the afterlife as he breathed his last, miles from the ocean.

I wrote a eulogy that the local paper ran. It was filled with mentions of sailing, with plenty of lines about yardarms and safe harbors and sunsets. There was never a funeral service, so I never did have the chance to read the eulogy to his friends and family. As far as I know his widow keeps his ashes on a shelf somewhere in her cluttered house. I’d like to get some of them one day.

I’d put some in a cigar case and drop some into the ocean, or into Biscayne Bay. Doing so, I’d crack open a beer and watch as the ash flecks drift out to sea, destination unknown.