An easy roe to hoe 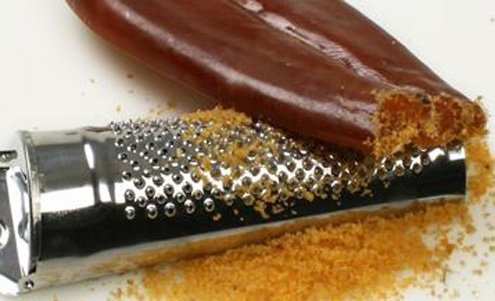 he roe of mullet, bottarga, massaged by hand to extract liquid, salted and then pressed between wooden or marble slabs to flatten the egg cases, has become one of the delicacies of my kitchen.

Many years ago, when we took a lovely weeklong trip through Sardinia, we stopped at the mullet farms in Oristano, and Cabras where, to our dismay, we learned that the poor mullet had been attacked by a parasite and were undergoing careful treatment to bring them back to normal. There was little bottarga in our future, at least while the healing process took place.

Fortunately, local restaurants had a supply of bottarga from healthy mullet and for three days we went bonkers for bottarga, bottarga paste on toast, bottarga grated over homemade tagliarini, bottarga in thin slices with drinks, and that most wondrous of dishes, bottarga put through a truffle slicer over eggs en cocotte (see below).

As it turns out, everything eventually returned to normal in Cabras, and bottarga is — whose use dates back to the Phoenicians — is now available in most big city food delicacy shops. Among the best in Rome is at Piazza della Pigna, near the Pantheon, where the thin Sardinian bread, carasau, and artisan crackers, can be found to complement the roe.

There are many levels of quality but good bottarga must be a lovely coral color and have a nice sheen. I do not peel my bottarga (but an Italian friend told me that it is almost always served out of its casing so it’s your choice).

One doesn’t normally eat bottarga daily although I could, willingly, except for the salt, but even the salt factor is hardly worth mentioning since so little bottarga is needed to enhance a dish (except at our house).

In Sardinia and Sicily, where so much mullet is fished and bottarga abounds, it’s often simply grated over spaghetti with a little olive oil to moisten the pasta. I’ve used it in other ways – some that might interest lovers of this poor man’s caviar.

In summer, by all means grate it over pasta, any pasta. If you’re using pasta or rice in a salad, add very thin slices of bottarga, olive oil and good vinegar or lemon juice, toss and serve.

Summer’s end tomatoes, ripe and sweet, are delicious mixed with bottarga cut into small dice, and celery, chopped very fine, olive oil and vinegar. Spoon this over bruschetta from the grill. Or, to bring a zing to the table, slice or grate bottarga over almost any tomato dish, raw or cooked.

When in season, serve slices of ripe mango, green or yellow, or Cavaillon melon dusted with grated bottarga, a spoon of olive oil, and a nice grate of fresh black pepper.

In the fall, when celery root appears in the market, peel the root with a vegetable peeler, cut into quarters, and parboil in lightly salted water for 3-5 minutes. Slice the root very thin or in julienne, toss with olive oil and lemon and grate bottarga over all.

In late fall, when grapes are appearing after the harvest, I serve them after dinner with roasted chestnuts and little chunks of bottarga, much as one would eat fave (broad beans) with Pecorino.

En cocotte: Heat the oven to 350F (185C). Coat the inside of small over-proof dishes with soft butter, break two eggs into each dish, add a spoon of heavy cream, salt and pepper and cook the dishes in a bain marie for about 9 minutes. Remove from the oven and grate or slice bottarga over each. Heaven in a dish.

It could be that the glory days of caviar from Belluga and Osetra are over — at least for most. The sturgeon population appears to be dwindling, and commercially it is not an easy fish to raise. Enter bottarga, no longer a “poor man’s’ caviar,” but certainly a bargain compared to €500-an-ounce fish eggs.

Just don’t get into my habit of simply biting off a nice mouthful and enjoying bottarga with no frills. Now that could become expensive.