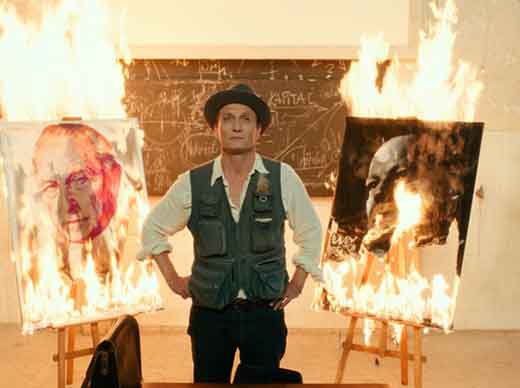 irector and writer Florian Henckel von Donnersmarck’s Oscar-nominated “Never Look Away,” loosely based on the life of top-selling German artist Gerhard Richter, is easy to watch, despite its excessive length (three hours) and many scenes that foreground Nazi horrors.

Act I unfolds while Germany is in the throes of National Socialism and World War II. Kurt Barnert (Tom Schilling), the Richter character, is six years old, entranced by his schizophrenic, art-loving aunt, Elisabeth (a luminescent Saskia Rosendahl). From the back of the ambulance taking her to a psychiatric facility, Elisabeth says to young Kurt, whose relatives try to shield him from her view, “never look away,” establishing the premise that he must bear witness to all that will unfold. By the end of this act, many of Kurt’s family members will be dead, at the hands of the Nazis and the war.

In Act II, Kurt develops his painting skills in Dresden, East Germany, at a sign factory and an art institute, painting social realist murals. He’s repeatedly told art must be about and for the state, not “me me me,” the mantra of the West. Kurt and wife Ellie (a beautiful but one-dimensional Paula Beer) escape to West Germany just weeks before the Berlin Wall is erected, then move to Dusseldorf, a hotbed of avant-garde art. There, at the art school he plans to attend, Kurt is escorted through hallways and studios in which students and faculty frenetically engage in bizarre artistic endeavors—a caricature of the avant garde —many featuring some kind of performance, such as rolling one’s body in paint to create an artwork. Straightforward painting, Kurt’s specialty, is understood to be passé.

Act III is the artist finding himself and developing his unique style, based on his past, traumatic experiences; in other words, bearing witness. Richter, perhaps somewhat tongue-in-cheek, once called his art “capitalist realism.” The title of the film in German, suggesting the need to tap into the sub-liminal, is “Werk Ohne Autor” — “Work Without Author.”

An equally important and pervasive theme is the criminal Nazi eugenics program, led by the imperious Prof. Carl Seeband (Sebastian Koch), the evil Nazi ob-gyn —and Ellie’s father–who shows up in all three acts. Seeband (who played the anti-establishment hero in Von Donnersmarck’s 2007 Oscar-winning “The Lives of Others”) believes his son-in-law to be a genetic defective (he claims Kurt suffers from a facial palsy and, of course, there’s the crazy aunt), and he consequently personally aborts his daughter’s fetus, apparently rendering her infertile. He’s that bad. In one of the film’s few subtleties, the viewer’s desire for revenge against this nasty Nazi villain is never fully requited.

The attempt to uncover an artist’s influences and his path to success is laudable, but “Never Look Away” settles for ideological simplicity. The East German artistic approach is all bad (though one can’t help admire Kurt’s facility as a muralist); the Western one is all good. Heavy-handedness abounds. At the top of that heavy-handed list is a long, didactic monologue by Kurt’s art teacher, Prof. Antonius van Verten (a charismatic Oliver Masucci), whose entire oeuvre consists of works in felt and grease (we kid you not), materials that derive from a harrowing war experience, the details of which will not be withheld.

Up to this point, van Verten’s m.o. as a teacher is that, incredibly, he never looks at nor comments on student work. For Kurt he somehow makes an exception, delivering the speech that purports to be the catalyst that will activate the young artist’s authentic side, helping the heretofore artistically misguided and hapless young man find his own “felt and grease” (and become the famous Gerhard Richter). Which, of course, Kurt miraculously does! All it takes is a good talking to! Then there’s Kurt’s sexual release (repeated scenes of Kurt and Ellie rolling on and off the bed, naked) paralleling his artistic self-discovery. Ironically, the film itself smacks of the ideological simplicity of social realism.

Those who don’t mind being spoon-fed the film’s main ideas and are comfortable with one-dimensional characters, will find a compelling story inside this bloated, big budget ($20 million) indie. Others will long for the nuance and brevity of “The Lives of Others,” which cost only $2 million. Sometimes less is more.