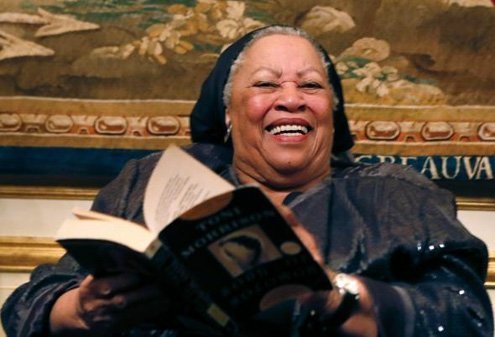 o fiction by the great Toni Morrison has been as hotly anticipated than her latest novel, “God Bless the Child,” the 11th in her storied career. After a lifetime spent writing searing accounts of America’s historic racial divide, the Nobel Prize winner announces this work as her “first contemporary setting,” a tale of “beauty… what it’s worth in the world.”

Her lead is Bride, a gorgeous 23-year-old year old with blue-black skin. She is beauty as commodity and owes her success to a carefully constructed image. Does Bride represent a Morrison foray into the black-white divide? Not quite. Instead, Morrison is interested in the wholesale reduction of people to goods, a fresh spin on her vision of American reality.

This time, the dehumanization is extended to the growing nightmare of child abuse, often a colorblind violation — though victimization rates do double for children of color.

Just ask voluble, confused Bride. She’s one of several narrators in Morrison’s story. As always, Morrison’s characters speak through intensely dramatic monologues. These many speeches and stories build to an impassioned crescendo illustrating the haunting, lifelong consequences — both physical and psychological — of child abuse.

Born in 1993 as Lula Ann Bridewell, Bride sheds the long name at 16, running away from home and finding work as a stock clerk at a cosmetics firm, “somewhere in California.” Home as she knew it never wanted a darkie child. Her light-colored father denied fathering this “African black” baby and fled. Sweetness, Lulu Ann’s mother, convinced herself that even touching her dark child could contaminate her “high-yeller, almost-passing-for-white status.”

The Sweetness monologues are packed with bitter and unrelenting self-justification. She says she punishes Lula Ann to toughen the child against a world that despises darkies. That hatred emerges at school. Bride’s mixed-race classmates insult her, spitting on her skin.

Once in the work world, Bride hires a personal trainer to improve her job chances. His advice: wear only clothing that’s white, sexy and clinging. Her career skyrockets. She’s soon running with the celebrity crowd, drugs, alcohol, and hot sex in the mix. Morrison sketches this class harshly. In “God Help the Child,” her famed, lush prose is notable for its absence. Nothing softens the author’s attack mode here.

Bride’s success is propelled by media focus on her now-stunning looks. But escaping the “ugly darkie” cage means falling into another trap. Emotionally, she remains Lula Ann of childhood years past.

At 23, she decides to figure out just who Bride-Lula Ann really is. She tells lover Booker she intends to financially assist a newly paroled child molester to begin her voyage of self-discovery. At eight, Bride’s false confession had put the wrongly accused woman in jail. Booker’s reaction is furious and stark. “You not the woman I want,” he tells her, getting out of bed and the relationship.

But Booker has his own burden. He never stopped grieving for his brother Adam, kidnapped and murdered by a serial child rapist decades before. Bride doesn’t know this. In fact, she next to nothing about her long-term lover, not even his address. Whenever Bride tried reliving her childhood trauma in Booker’s presence, he’d tell her that racism was a choice, a form of exploitation devised by capitalism. Without his comforting presence, Bride falls apart.

To reclaim her lost self-esteem, she decides to track down and confront Booker about his disappearance. Along the way, she’ll meet a fiftyish “hippie couple,” who rescue Bride from a car smashup and care for her. Sick of materialism, they inhabit a run-down shack (“the good life in California.”) Rain, a six-year-old they shelter, tells Bride how she fled from a mother who pimped her with men. In this unlikely “family,” Bride has her first experience among people who give freely, seeking nothing in return.

Next travel stop is Booker’s new California address, c/o his aunt, Queen Olive. He’s living in a trailer, she in a ramshackle home. Like the “hippies,” both are happy with their “authentic” life. Queen explains she had husbands, but they all stole from her, even her children. A hard soul, she’ll force Booker to confront his obsessive grief, and to finally grow up. She’ll also tell both Bride and Booker that “love” is little more than a word people use to get things they want (“She knew from personal experience how hard loving was, how selfish and how easily sundered.”) Morrison also appears to suggest that Bride’s newly acquired disdain of money comforts has made her more adult. After the Booker breakup, Bride’s period stopped, her body hair vanished, her breasts, too. Now, as a grown-up in a trailer park, she (magically) regains them.

A question rankles. Just how do these outside lives provide any objective remedy to a larger society that treats children as merchandise? Readers will remain divided on the point.

But most important in this passionate book are the voices of a nation’s abused children. Their fate is the American nightmare, delivering the cry, “God Help the Child.”