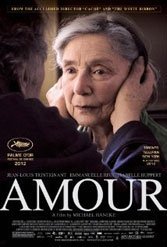 German writer W.G. Sebald once praised a novelist he esteemed by saying his work possessed a universal vision that surpassed the “lesser concerns” of contemporary writing. In film, however, so-called lesser concerns are often vital to what gives pulse to a sentimental whole. Film is largely intended to entertain.

Here, writer-director Michael Haneke does not, nor does he wish to, because his story is a stark novella that depends as much as anything on the sounds of night breathing and the fluttering of trapped pigeon in a corridor, since those are the kinds of itinerant sounds that help give sickness-unto-death its basic vocabulary.

Anne (Emmanuelle Riva) and Georges (Jean-Louis Trintignant) are an aging highbrow couple who even after decades of marriage adhere to elegant formality of their strict French upbringing, playing out the slow last stage of their life in a spacious Paris apartment filled with books and memorabilia. They have an adult daughter, Eva (Isabelle Huppert), but see her little. Theirs is an old-school union based on mostly memorized spousal roles and the primacy of the stiff upper lip.

When Anne suffers a stroke and is partly paralyzed, she returns home demanding Georges never again “abandon” her to hospital care. So begins an uncompromising look at a husband caring for his wife as she gradually collapses physically and retreats from reality. Unlike their part-time nurses, Georges refuses to condescend either to his wife or to her condition (she won’t have it), treating her instead with the tender but often hard respect on which their union was founded. These is no manufactured emotion, no soundtrack-induced sentiment, no papering over the humiliation of dying.

What some might find brutal — Haneke’s rigorous honoring of the reality of decay — is fact a loving effort to get at the undiluted essence of the end of life. The film never leaves the apartment, or its two inhabitants. It refuses to lionize either life or death but does make a shockingly wise case for the importance of discretion and the need to keep some things private, which connected society is sentimentally instructed to ignore.

There is no “quality of death”; there are decisions, some extreme, that only people who have known each other a literal lifetime can make, ones that take into account the role that suffering plays in all moral action. This is one of the first truly great works of the 21st century, making praise for the individual performances secondary to applaud the universal power of the story.