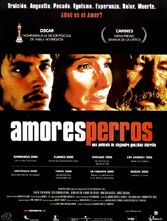 Mexican director Alejandro González Iñárritu opens at full throttle: Gunmen in a flashy SUV chase a car with two youths and a bloody dog inside. A few wild and vulgar miles later, a crash. Iñárritu (“21 Grams,” “Babel”) had only a 1996 Spanish-language short to his credit when he crafted this stunner. For Iñárritu, Mexico City is more of a health threat than a city. He sets up three parallel story lines whose only apparent commonality is dogs and love in vain.

The first story concerns Octavio (Gael García Bernal) who lives with his mother, brother Ramiro (Marco Pérez), and Ramiro’s teenaged wife Susana (Vanessa Bauche), and their child. Ramiro is violent but Susana acquiesces. Octavio, secretly in love with Susana, dreams of spiriting her away. To raise cash, Octavio turns to dog fighting, using his own animal, Cofi. It’s illegal but lucrative.

A second tale involves Daniel (Álvaro Guerrero), who leaves his wife and children for a model named Valeria (Goya Toledo). When they’re finally together there’s an accident involving her dog.

The third story, related to the first two, helps square the circle: El Chivo (Emilio Echevarría) is a homeless squatter and paid assassin who seems to communicate effectively only with dogs. With his animal companions, he pushes a cart and stares at a woman from afar. What’s his secret?

Iñárritu’s world is out of touch with the sacred. Brothers hate each other; people are murdered for gain; dogs are instruments of mortal combat; husbands and wives cheat for sport. Pain and disappointment level the playing field. The dog-fighting scenes pack a wallop, making each Iñárritu man a snarl-in-waiting.