Among the child believers 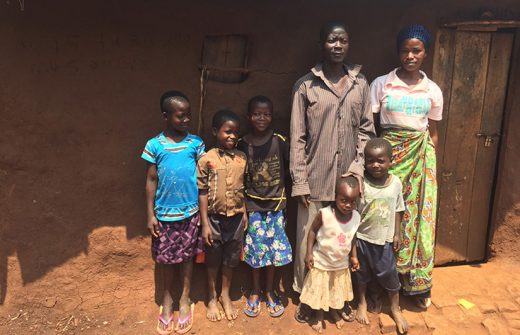 "Don't you want to find a new husband?" people have asked me.
T

his morning it’s raining in Naggalama, Uganda. It’s been raining a lot the last two weeks, both brief, light showers and heavy deluges. Naggalama is my home base during a month-long Ugandan stay in which I’m visiting a number of rural hospitals as part of research into palliative care. Around Naggalama, gray skies shroud the blistering, equatorial sun and the rain cools the usually hot air.

For me, it’s a welcome respite from sticky heat. But for the Ugandans I’ve talked to, this is their equivalent of frigid winter. While I walk comfortably in a short-sleeve shirt, I see others shivering in their sweaters and coats. They look at me wide-eyed, and I return the gaze. It’s not a critical look, more one of surprise; shock at my (or their) response to this weather.

Other differences have arisen, some of these more philosophical, cultural, and belief-driven.

A common topic of conversation here is family. Family is of utmost importance in Uganda. The measure of manhood for many here is how many children you’ve fathered. Not so in the United States. It is not surprising, then, that the average number of births per woman in Uganda (5.6) is more than 3 times that of the average woman in the United States (1.8, according to 2016 statistics from the World Bank). Some professionals I’ve spoken to want smaller families. But I’ve seen people in the rural villages with eight, nine, 10, even 11 children, and not always enough food for them all.

It’s hard for me to wrap my head around this practice. I understand the desire to have children but my heart breaks when I see families that have more than they can afford.

Similarly, it’s hard for people here to comprehend the fact that at age 36, I don’t have any children. And I may not have any, ever.

“Don’t you want a child?” many have asked me.

The measure of manhood for many in Uganda is how many children you’ve fathered. Not so in the United States.

“But you will not be complete until you have a baby!” they’ve insisted.

“I don’t feel that way,” I’ve responded. “I find fulfillment in other things in my life.”

My principle always surprises, but the level of others’ incredulity varies.

“Lorien, are you normal?” one person asked me.

It took me a moment to fully understand this question. What did “normal” mean in this context? I realized later that normal might have been a euphemism for being heterosexual. The opposite, “abnormal,” then referring to being homosexual —still a crime in Uganda, although no longer one that gets you the death penalty.

This conversation about having children is inherently circular. I orbit my credo, and they theirs. But our diametric circuits never intersect.

Likewise, being divorced is a strange concept here. Being separated from your spouse, finding a new one, or simply having children with someone to whom you are not married — these things are commonplace. The act of a formal, legal divorce though, is not.

“Don’t you want to find a new husband?” people have asked me.

Frequently, after exhausting the topic of divorce, the conversation returns to children.

“But you didn’t even have one child when you were married?”

Saying those words has always made me imagine what it would be like to raise a child as a single mother while also attending medical school. I shudder. I have the greatest respect for anyone raising children during this journey toward becoming a doctor, single parent or dual household. I find it hard enough to take care of myself, let alone take care of someone who is entirely dependent on me for their every need. I don’t explain all of this, although maybe I should.

“But we women in Uganda often raise our children alone,” one woman told me. “The husband often leaves. If you look at 100 schoolchildren, you would find that for 90 percent of them, the school fees are paid by the mother,” she said. 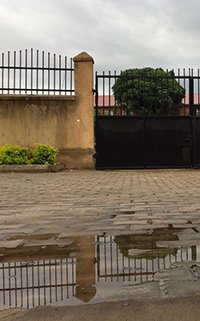 Puddles and gray skies seen from the front porch of the author’s lodgings in Naggalama, Uganda, some 40 kilometers northeast of Kampala.

Those statistics aren’t backed by research, of course. But I know that while there are many good fathers and husbands here, the suggestion that women are the ones who generally tend to the children has some truth in it. Many women do raise their children alone here. If a woman can’t bear children, or can’t bear any more children, her husband may leave her, I’ve been told time and time again.

And if a woman becomes seriously ill, her husband may also leave her. I’ve seen that firsthand with the palliative care patients we’ve visited in rural villages. From a trip I made to Uganda two years ago, I remember one woman who had terminal cancer. She had 11 children, some of them adults with their own families, but several of them young and still living with her. Her husband had left and found a new wife. He continued to “give care” — provide financial support — for the children while the patient was alive. But she worried about what would happen to her children when she died.

Uganda has no formal state safety net. No foster care, no welfare services, no alimony or child support.

To me, having a child in this environment sounds terrifying. But for many Ugandan women, this situation is all they’ve ever known. What frightens them more is the thought of not bearing any children at all.

At some point, I always steer the conversation toward another topic, knowing that we’ll get nowhere no matter how long we discuss the merits of having (or not having) children.

In the end, all I can hope for is that I’ve done my best to listen and remain open to hearing about and discussing beliefs other than my own. To consider why someone might hold those different beliefs, even as I do the opposite.

I remind myself that cultural exchange isn’t about convincing someone else that your ideas are better. It’s about sharing what you do, finding out what they do, and talking about why. And at the end of the day, doing your best to respect each other.