Among The Cat People 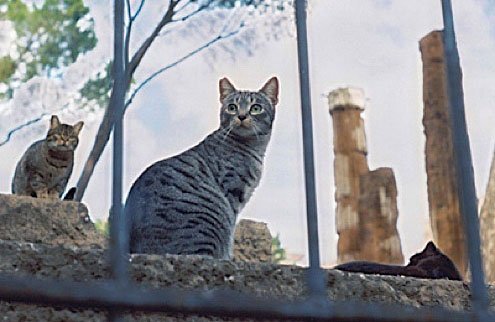 The Roman Forum and the Colosseum are havens for felines, who take advantage of the many 'gattare,' or cat women, who lovingly descend to feed them.
W

hen Anna Berti came home recently after another solitary evening of planting shoeboxes full of food for stray cats in and around Rome’s Villa Borghese, a hungry cluster greeted her at the window.

“They like short, butterfly pasta, not spaghetti,” she said, as a bulging black cat waddled out from under a dumpster to slide along her ankles. “I can’t tell which is my favorite. They are all so beautiful.”

There are cat people, there are dog people, and then, there are the cat ladies.

There seems to be at least one gattara, as they are known in Italy, in each neighborhood and they form a loose community that keeps Italy’s felines well fed.

Some venture out under the cover of night to serve pasta dishes on car hoods or slip tuna cans under dumpsters. Others work in full daylight, and have organized themselves into associations. They are a polyglot population, speaking in Italian to the shopkeepers and passers-by from whom they procure pizza crusts or cans of Iams, but once in the company of cats they converse in clicking tongues.

According to the national animal protection board (ENPA), there are more than seven million cats nationwide, and while no one keeps exact count, many animal associations estimate that there are tens of thousand of gattare taking care of them.

But the cat lady capital is Rome, where the city’s animal rights department says there are about 180,000 strays, many of which are noticeably plump. The gattara’s roots may be traced as far back as about 1580 BC, when a cult imported to Rome from Egypt worshiped the goddess Bast, who had a human body and a hairball head.

The city recently played host to Magnificat, a feline beauty pageant that featured a violet-hued fur ball as its promotional pin-up. At newsstands, cat calendars honor “The American shorthair, cat of the pioneers.”

The city has sponsored a cat sighting tour called “Roma Felix” and endured 2,000 feline fanatics toting kittens in their handbags during the annual “Cat Pride” parade.

Among the organizers of that march was Silvia Viviani, 64, who may very well be the queen of the cat ladies. The former opera singer runs the Torre Argentina cat sanctuary, which is essentially an orphanage and neutering halfway house for about 400 strays on a roman ruin close to where Julius Caesar was slain.

But despite working in such historic digs, Viviani says she gets just as bum a rap as the city’s other cat ladies, a number she puts in the thousands.

“Too many think gattare are soft in the head half-witches that stink of fish. We must break this misconception.”

The road to emancipation, she says, lies in organization and strong-arm tactics.

Most of all, she is fed up with nefarious multinational corporations like “Whiskers” or “Iams” destroying expired cat food. She wants them to cough up the cans free so that saved expenses can go towards neutering.

“I will tell all the gattare to strike against canned food,” she said. “Then they’ll see how strong we really are.”

Organizing the country’s gattare might not be so easy. Viviani acknowledges that the myriad group ranges from “the bum to the princess.”

Even in the playgrounds of Roman high society, the elite country clubs along the Tiber, there are gattare on the job. Giorgio Borra, a rare breed of male gattaro, has been taking care of cats at the Foreign Ministry’s club for nearly 20 years. Here they live the good life, drinking out of the swimming pool, taking in tennis, and feasting on pate’.

But Borra has also detected some disturbing trends.

“The diplomats abandon the cats when they move abroad,” said the 78-year-old. “It’s unspeakable.”

But jet-setting owners can be the least of Borra’s problems, as political intrigue has infiltrated the animal kingdom.

“Sometimes dogs from the Defense Ministry’s club sneak under the gates and kill our cats,” he said.

Conditions for gattare outside of Rome can also prove perilous.

A few years ago in Venice, 250 sick or stray cats were evicted from the island of San Clemente to make room for what is now a luxury hotel. People who wanted the cats gone went so far as to spread the rumor that they had AIDS.

Now the largest cat colony is in a sprawling hospital in the heart of Venice, where three women take care of 60 cats that have free run of the courtyards and marble halls, though the local health authorities have restricted them from operating rooms.

“Sometimes the patients come out and caress them,” said Gabriela Sanna, 50, one of Venice’s more than 100 official gattare and the secretary of the animal rights group Digos.

Sanna, who teaches art in a local elementary school, always had affection for cats, but she became really aware of the gattara’s importance only after a friend asked her to draw Digos’ annual calendar.

“It’s a huge responsibility, if you skip a few days [of feeding], it could be fatal.”

But Venice’s canals and the overall abundance of water, an element generally reviled by cats, present a unique complication for gattare. Often they find themselves rescuing kittens who have leapt onto boats to escape flooding, but who remain trapped aboard when the tide wanes.

Not everyone is up for such particular work and recruiting has been a challenge.

“There’s no one to replace them,” said Deborah D’Alessandro, an American gattara at Torre Argentina.

“Who’s going to take care of the cats?”

About the Author: Jason Horowitz