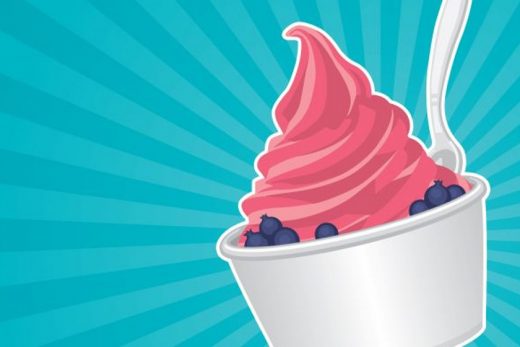 The ingredients? That's for you to know, not to ask….
M

Why, you ask? I swore that I’d never go undercover again after what I went through infiltrating Smoothie Palace.

But after months of patronizing the location and observing the treatment of the clientele at the hands of the servers, I felt a familiar moral itch begin to stir. I decided to go back on my word for one last intervention. I knew in my gut that this particular Tutti Frutti locale didn’t deserve the 4.5 stars it had received on Yelp. And my hunch was correct.

Getting hired was easy since I had learned to mimic the empty smiles (concealing malicious souls) worn by all of its staff. I soon found myself in training, and that’s where the horror began. Here are some of the chapter headings in the training manual: “How to serve customers the wrong drink” and “Could you repeat that?” A lesson in fostering annoyance.

As paying customers have always suspected, employees are rigorously trained to undermine customer patience at every turn. The aim is to prove the customer is anything but always right…and they do it well.

Getting hired was easy since I had learned to mimic the empty smiles (concealing malicious souls) worn by all of its staff.

Remember that time when you botched your schedule and were late for a meeting, so you tried ordering your morning juice during a conference call? The server had the unmitigated nerve to serve you a Michelan Juice when, yes, that’s what you said, but you obviously wanted a Sistine Carrot. Clearly an intentional snub on their part.

Or when you handed the server a $10 bill, and she felt the need to tell you the total was $13.10 three times (why even listen to the first two?) before pointing to her screen. Another malicious and demeaning gesture calculated well in advance as part of basic training.

After my own training was completed, things only got worse. At the start of my shifts, the shift-leader would share the scams of the day. An example: “Today, we’re going to tell customers we’re out of Almond Butter Sauce even though we have a case of it in the fridge [big grin]. If they ask for BottiCherry soft serve, taunt them by saying you just served the last of it to the person ahead of them [bigger grin].”

It was nasty, twisted stuff these mind games. They’d even wager on how many customers would throw justifiable hissy fits when told what they couldn’t have.

I tried being compassionate towards clients, but I’d often have to sit back and watch fellow servers, skilled monsters, as they toyed with customers. Among their favorite past-time was swiping credit cards four or five times to see the sheer terror in the eyes of customers, even though the payment was processed on the first go (this worked tantrum wonders on customers with American Express Black cards). I also saw servers tamper with the card reader as additional entertainment.

Another act of contrived sadism was to give clients as many coins as possible in change. This trick fell under the “How to weigh people down” section of the training manual (known colloquially as the “purse and pocket killer.”)

They’d even wager on how many customers would throw justifiable hissy fits when told what they couldn’t have.

I heard servers jeer at ignorant customers unable to specify orders beyond, “I want the one that’s ginger, kale, lemon, and beets.” To this, servers were trained to reply with disorienting brutality, “We don’t have a juice with all those ingredients, but we do have juices with several of them.” Or worse, they’d turn to mocking condescension with, “Do you mean a BrunellesKale? Or maybe the CanaLettuce?”

Perhaps the most abominable act was the brazen habit of making up store “laws.” I saw customers break down and sob after being informed by the cashier that they’d miscalculated the cost. They had failed to add the CRV, which wasn’t included in the list price. “Oops!”

CRV? An extra ¢5 cents for a plastic bottle? I once eavesdropped on a staff conversation in which a manager confessed to an employee that company insiders had personally lobbied the state to pass the CRV law for no other reason than to unhinge customers – another example of willful malice in action.

I must now stop this account of my undercover embedment. My lunch break is over, and I need to send this transcript off before I’m discovered. I might not make it out. I probably should have kept my nose out of this entire mess, as I suspect Tutti Frutti and its spies may be on to me. So don’t allow my sacrifice to be in vain. Let people know about this growing menace, get the word out, and advise them to keep their Amex Black Cards safe from abuse.