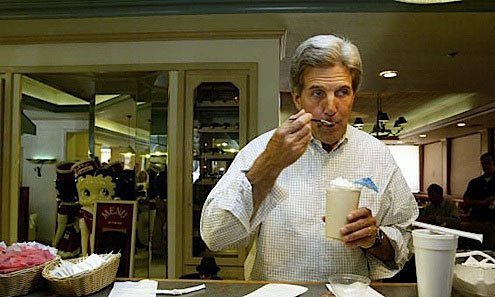 omething’s off with the hormonal alchemy of this American election. It has a libidinal component that polls have tried to pin down with only haphazard success.

It’s fairly certain that young men favor the incumbent president. They see him as brawny, willing to fight, endowed with the proper reservoirs of testosterone in a world re-established as male by the desecrations of September 11. The last time maleness and the White House collided was under Bill Clinton, when the president’s libido-gone-amok embarrassed many American men. Deceiving your wife was one thing, lying ineptly and repudiating guilt another. Clinton’s pattern of backtracking and dissembling enraged his sex all the more because it depended on a glibness more associated with European men and their charming evasions. Willy Clinton, the consummate Democrat, was unwilling to discipline himself.

This character weakness is significant now because the men who support George W. Bush appear to find masculine solace (not the word they’d choose) in a morally righteous president who celebrates national potency in bringing enemies to heel: For him, diplomacy (and the chatty pause for thought it elicits is girl’s club and liberal. The virility of the United States hinges on defending itself aggressively and promoting ideas through force. You hurt us and we’ll hurt you, goes the Bush view, and you’ll never catch us asking for anyone’s permission. It’s a vulgar and unapologetic outlook in an arena of handily diminished compassion, war. It’s also a dreamed-of calling by disciples of American control: a mission to force submission and establish tough-love pre-eminence with or without allies. For those who lived under Cold War caution, the prospect of exterminating debate is alluring.

What polls say about women is considerably more complex.

Early in the campaign women across age lines were wary of this exaggeratedly male method. Bush’s defiance seemed more in keeping with a single-minded teenager than a sage president. And John Kerry, at first, sounded less simplistic. Here was a thinking man’s man (a more female man) with combat experience. Kerry’s standing among women was at its peak when the Bush campaign savaged his Vietnam War record, alleging cowardice, indecision, and deceit. The bruising intention was to portray an intellectual philanderer who, like Clinton, would tell the truth only at his convenience.

It was a prosperously malignant effort. Wounded, Kerry began out-Bushing Bush, harping on a “kill the terrorists” motif he seemed ill-suited to embrace. The shortcomings of the “Killer Kerry” model encouraged critics (Matt Bai is the latest, in a sprawling New York Times Magazine piece) to pick away at him. Bai describes a semi-neurotic candidate afraid of committing tactical blunders (Kerry, for example, waffles over whether he drinks tap water or “foreign” water, evidently suspicious of Bai’s intent, and rightly so). Kerry, for Bai, is a man cursed with a liberal’s thoughtfully inconclusive notions of how to fix the world; he has brainstorms but no vision.

Bai’s piece evidently resonated with Bush campaign chiefs because the male fever pitch has soared again lately: Thinkers can’t be trusted to act and action (specifically, deadly acts of force) is the only appropriate response to the post-Sept. 11 terrorist menace. Fail to promote violence against those who use it and you trivialize the threat. Dissent from Patriot Act security and you demean vigilance and motherland. Suggest the use of diplomacy to persuade reluctant friends and you are an apologist for suicide bombers. Seek motive in how the world behaves in America’s regard and you are a Democrat.

This opus of virulence should come as no surprise. American war policy, hardly original, is an inseminating mission that approximates the language of rape; democracy must be introduced and induced, by force if necessary; the long-suffering people in authoritarian nations “want” what they’re getting. When Kerry, speaking to Bai, mentioned controlling rather than defeating global terrorism, moving it sensibly from coercive obsession to “nuisance,” the Bush alpha team pounced again: Tell the 3,000 people that died on Sept. 11 that terrorism is a nuisance. Their subtext is far more primordial: Kerry isn’t man enough; Kerry isn’t a warrior; Kerry can’t possibly run Washington, the Sparta of 2004, because he’s just not hard enough.

The pretend Kerry might want to belong to this Fight Club (which includes females), if only for the votes it yields, but trips up badly when he stops to siphon from Bush’s shrill machismo. He should stop, and stop very quickly, or face running a presidency of imitation, the worst imaginable consequence of a campaign framed dangerously.