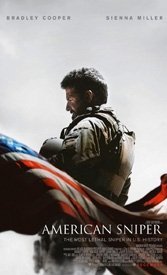 Clint Eastwood’s portrayal of much-honored American SEAL sniper Chris Kyle (Bradley Cooper) is a highly focused, high-octane if fairly linear tale of a rodeo man whose deeply held patriotism and resulting rage at terrorist acts take him from Texas backwater life to the Iraqi front lines, where his warrior’s passion for his job — shooting precisely and accurately; four tours, three years, 160 “kills” — makes him a legendary figure among his male cohorts but over time estranges him from a coherent awareness of life outside combat, leading to family disruption and the need to bring order to his non-war life.

Above all else, it is an homage-driven war movie about dedication, obsession and trauma, which Eastman, attentive as always to the shadings of honor, avoids sentimentalizing by ensuring Cooper’s Kyle — “I’m not most men. I just don’t quit…” —never strays from a one-note characterization that eventually feels like the whole truth and nothing but the truth. Kyle is not subtle or complex. He doing what he’s doing, he believes, to defend his country against “savages,” bewildered at those who insist he has a death wish or has become a combat addict. He is a proud and unapologetic defender of brothers in arms and of country (“They were killing our guys, and I’m willing to meet my creator and answer for every shot that I took.”) It’s the consequences of such a choice that leave a mark, and that Eastwood gets to that scarring through Kyle’s faithful but increasingly unsettled wife Taya (Sienna Miller).

Seeing life as a sniper in war can be to see peace as threatening — unless you apply the breaks, which Kyle did, only to be murdered by a veteran, a cruel of irony. Based on Kyle’s 2012 memoir, “American Sniper: The Autobiography of the Most Lethal Sniper in U.S. Military History.”