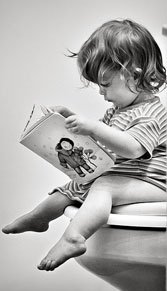 live life. Don’t get me wrong. I don’t do extreme sports or intravenous drugs but I have lived through difficulty and danger, joy and excitement.

I’ve spent wartime in Bosnia and made money speaking in front of an audience.

I’ve lived in two countries and on two coasts. I’ve broken bread with celebrated individuals and had cocktails with some notorious folks.

I’ve been to paradise and I’ve been to me. But nothing, oh nothing could prepare me for the tumult of potty training.

It started last spring. 2009. I was on bed rest, and Oedipus (aptly nicknamed) was lapping up the 24-7 attention with his mamma. I thought I would seize the day and begin this journey before his second birthday. As I seized I also contracted. Well, my uterus anyway. So much for my toilet intentions. My ob-gyn put a stop to our training.

When baby no. 2 came along last summer, everyone told me that it was cruel to start the process when Oedi now had a brother with which to contend. Besides, I was so busy playing nursemaid, bodyguard, feedbag and cleaning lady. I didn’t have time to toss him on the toilet every thirty minutes.

Over Christmas, we left Rome for the East Coast and hibernated under three feet of snow. My older sister — a self-proclaimed potty training expert and mother of four — insisted that it was time, and that she could handle the task. All the experts said to wait for a period where there wasn’t a new baby, travel or a new school experience.

But my sister insisted. She … insister-ed. “I can do it. I can’t cook, clean or do anything domestic, but I can get kids to pee on the potty.” Braggart that she was, I believed her.

I shouldn’t have. I’m a sucker. Oedipus proved to be quite the opposition. A formidable enemy. My sister is still stymied by the defeat.

We returned to Italy with Pampers in tow. (That’s right people, I quit washable diapers and we are currently very high up on Al Gore’s hate list.)

I became anxious. He was too old, they were too expensive and I was tired of changing two kids.

I gathered an arsenal of potty stuff. DVDs, books, stickers, candy. I even made up a song and interpretive dance. Armed with chocolate as well as jazz hands, I made potty time the stuff dreams are made of. I was fun, entertaining and patient. I was even enjoying it for a while.

Until I realized that there I was, dancing as fast as I could, and my son hadn’t put anything in the toilet except for a couple of Legos (which subsequently made my Fosse fingers soggy). It was worse than receiving a bad review on Broadway. It was exhausting.

I changed tactics and made it more serious. Peer pressure. “All your friends are doing it.” He could have cared less.

I tried withholding his favorite things — he is passionate about trains and busses. “No public transportation if you don’t use the bathroom.” Maybe he knew we could take the car?

I tried rewards… and bribes. Nothing worked.

And then I lost it. I was a puddle on the floor sitting next to a puddle on the floor. How could I have failed in this menial task? And if I could not master bladder control how would I be able to do the other more difficult tasks of parenting? If I couldn’t do this, how would I ever get through the birds and the bees or in the words of Sid Vicious, “Sex and drugs and rock and roll?” I was sure I was failing as a parent.

I became like the Texas cheerleader mom — but without the big hair. Obsessed and incensed. Before I had children I can remember passing judgment on toddlers who I deemed too old to be using diapers, and now I had one of those toddlers! I was ashamed of myself and of him.

Then my girlfriend came to visit. She is single and fabulous and wise beyond her years. (P.S. She has three nephews.) After a few hours with my son she proclaimed, “He is not ready.”

“Are you sure he isn’t just screwing with me?”

And just like that I waved my white flag (they were actually big boy pants I hung on a wooden spoon). I had lost the battle but given myself a break.

I feel better having been given permission to abort the mission even though I have to keep telling myself, “He will not go to Harvard, Brown or Stanford with diapers.” Especially because I know for a fact that Harvard, Brown, Stanford and the nursery school he’ll attend this fall demand full potty training. Please pray for me.