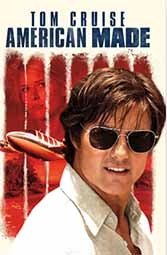 All hail Doug Liman. In “American Made,” he takes a not entirely savory subject and through light mockery makes it to immensely pleasurable viewing. Sketched out roughly, he story is this: in the late 1970s, at a time when Washington feared Communist insurgency in Central and South America, the CIA allegedly recruited a maverick TWA pilot, Barry Seal, and got him to photograph insurgent movements by flying low. But Seal was very soon in over his head, deciding to make a few bucks on the side by loading up drugs for the then-incipient Medellin Cartel. A few bucks turn into a lot more as opportunism and bungled intelligence become the name of the game.

To quote a bromide, it’s complicated. What’s not is a delightfully cheery and self-deprecating performance by wry Tom Cruise as the Louisiana-born Seal, who likes airplanes a whole lot more than politics as he comes to be known as “the gringo who always delivers,” whether its drugs for the cartel or guns to the reluctant Nicaraguan contrast (“They seem a damn site more interested in my boots than your guns…” he tells his CIA handler.) By exposing the Keystone Kops silver lining in a heavy story, Liman exposes the wacky American covert efforts in the Americas that produced the uplifting likes of Pablo Escobar, Manuel Noriega, and Oliver North and later helped generate the Iran-Contra scandal. Jason Bourne veteran Liman is relentlessly up-tempo, with ample clips of Seal’s beloved “Gipper,” Ronald Reagan; map graphics in cartoon form (Seal confuses Honduras with El Salvador); a soundtrack laden with southern rock; and aerial scenes that take Cruise back to “Top Gun” days.

“I was working for the CIA, the DEA and Paolo Escobar,” crows the ever-upbeat Seal. Does it matter that much of this may bear little resemblance to Seal’s actual, and darker story? No. Bottom line, this highly watchable, Cruise-controlled entertainment, as well as a sarcastic take on a silver of botched God Bless American history that the 21st-century focus on Islamic terrorism has erased from the collective consciousness.