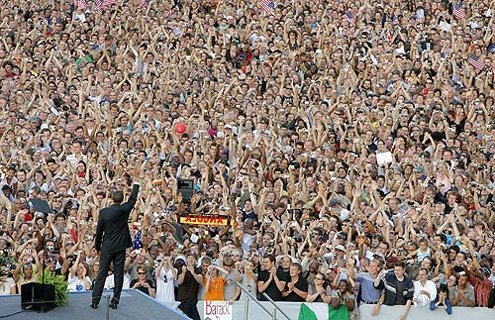 It's not really about walls...
B

arack Obama’s status in Western Europe has little do with policy. It’s not about the global economy, Middle East peace, the knocking down of walls, Iraq or Iran. It only marginally concerns the sitting president’s salty lack of appeal.

Instead, Obama exists as an augury.

For the first time in decades, the United States has produced a politician that gratifies the mass imagination outside the specifics of expectation. It’s a trait John Kerry and Al Gore lacked, and which Bill Clinton later acquired thanks to his Champs d’Élysées geniality.

What gets Obama into hot water at home, his philosopher-prince training and effortless class, is what attracts nationalist Europe. He’s accessible both to the European intellectual set (those who stir wearily from ennui) and disinterested cab drivers. They can feel feverish on his behalf without needing to account either for strategies or domestic slip-ups.

Tempting unrealistic expectation is a pox on candidates, and the bitter-bloody domestic scene is its hot-seat. Disappointment is inevitable. Obama recently roiled core supporters by supporting no-warrant wiretapping (and retroactive legal protection for those who spied at Bush Administration behest). Believers were chastened.

But July Europe paid no attention.

Obama explanation for dodging, artful and less so, came in fact from Europe’s dog-eared playbook (“Politicians are always guilty of that, and I don’t exempt myself.”) Europeans expect Machiavellian fecklessness. But that a candidate would admit as much is stirring. It’s a candor that conveys reassurance as an aspect of personality, an unabbreviated confidence destined to produce both instinctive ardor and scoffing (in the United States even loathing). Envy plays a role.

His supra-political standing in Europe also emerges from the continent’s comic book vision of an America that can improbably transcend ethnic archetypes and produce a superstar. His candidacy fits into a condescending fondness for America’s ability to astonish. Behold the elegant half-Kenyan running for president: Only in America! He’s the Hollywood ending of an as-yet unmade movie.

Despite waves of progress in trade and institutional egalitarianism, much of Mediterranean Europe remains regressive regarding class, race, and gender. Regional quarrels persist. Bigotry is commonplace. Resistance to change is individualism’s hallmark with shrewdness as success’s frequent apprentice. Social progress is gridlocked by ritual.

George W. Bush’s disdain for astuteness limited his influence. Compromise was limiting (and complicated) so he advertised its sabotaging as strength. Bush-style parochialism is what Europe least likes about itself. In it lies most of the continent’s 19th century and some of its 20th. A veteran of Algeria and Viet Nam, France foresaw Iraq’s tenterhooks four years before they drew blood. But by then mistrust and mockery prevailed.

That an Obama presidency will repair the transatlantic damage done is of no importance because the fence has largely been mended already (though civil liberties have paid a high price). But that’s not the point.

“We are a people of improbable hope,” Obama said in Berlin.

And there’s that sexy word again — “improbable” — tailor-made for a Europe awash in electoral rehashing.

Much anti-Americanism of recent years was anti-Bush sentiment in disguise. In fact, Europe still kowtows before a cinematic vision of American symbolically informed by wanderlust. Even in recession, it’s a place from which to borrow prospects, a road movie with scenes of woe and amazement juxtaposed against Europe’s forced and historically-tormented likelihoods. “Optimism without reality isn’t eloquence. It’s just Disney,” wrote New York Times columnist David Brooks while labasting Obama’s “innocent abroad” foray as “saccharine show for the rock concert masses…” Raging nonsense. Realpolitik isn’t what Europe seeks from America, or from Obama. Not for now. Moreover, Disney proved a treasure chest

Obama is the transatlantic myth’s first legitimate 21st-century spokesman. He radiates an America that matches up to the European vision of the individual explorer or round-the-world journeyer, an against-the-grain figure whose elegance and eloquence suggest a willingness to defy cynicism, or try. Inspirational traits to which Europe still aspires only by proxy.