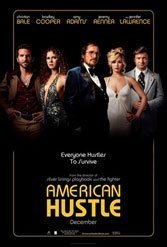 Director David O. Russell’s fictional plunge into the ABSCAM sting of the late 1970s is eccentric, erratic, electric and a shining exemplar of Hollywood filmmaking firing on all cylinders. Veteran New York hustler Irving Rosenfeld (Christian Bale) meets and falls head-over-heels for pretender Sydney Prosser (Amy Adams). The two join forces, he impersonating a shrewd moneyman, she becoming Lady Edith Greensly, fake English accent and all (“These are the role we were meant to play,” she says.)

Enter the FBI, in the sleazy person of Richie DiMaso (Bradley Cooper). Richie busts them both but gives them a way out if they’ll help corral others. That opens the door to what would later become to be known as ABSCAM, a wacky FBI sting that used a fake front-man sheik to dupe a New Jersey mayor (Jeremy Renner), the Mob, and U.S. congressmen to illegally subsidizing Atlantic City casinos.

The scam and the busts are farcical. Not at all the engaging private lives of the con artists. Prosser is crazy in love with Irv, who in turn has a wild wife named Rosalyn (Jennifer Lawrence), with the two women locking claws in a toxic rivalry that threatens to undo the best-laid plans. It’s battle of hoaxes with a 1970s backdrop.

What these details don’t cover is the repartee between Bale and Adams, the latter mixing manipulation, guile, swagger and luminous ambiguity to lock down whole sections of the movie. Bale again shows he can play fat man, thin man, Batman, or good-hearted crook. Lawrence manages Long Island-tinted hysteria well beyond her acting years. Renner makes the mayor of Camden look like Elvis channeled through Liberace. Cooper is the fall guy. “We’re all conning one another just to get through life,” says faux-noblewoman Edith-Prosser. Danny Elfman provides a score that makes the 1970s seem memorable.