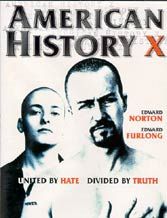 British director Tony Kaye relishes letting actors flash their menace. He blends black and white and color to keep the story straight — black and white is old, color new. Norton is incandescent, but Kaye hammers so seriously at “truth” that he shortchanges a key question: what happened to these two young men? That their firefighter father died in crack house blaze (one source of rage) only fuels cliché. Explaining Derek’s jail-time transformation might help, but Kaye deals with it only in snippets.

When in doubt, he cuts to brutality. Ambitious but facile.