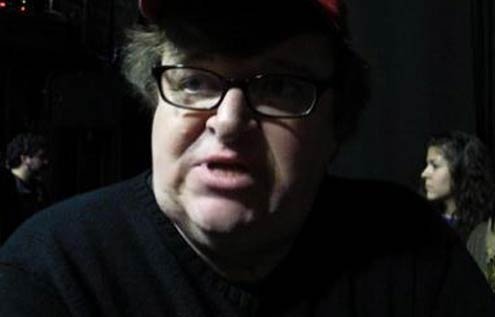 ichael Moore’s “Here Comes Trouble: Stories from My Fife” (Grand Central Press, 2011) is an auto-bio of his lifelong close encounters with no-think as experienced on the North American continent south of Canada.

Since “Trouble” relies on probing, but gentle sarcasm, it’s lightweight compared to his caustic film hits. But it’s also a LOL roller coaster across the Moore decades. Through an America hostage to the reassuring complacencies of TV catchphrases and greeting card “thoughts.”

But how come this rapier satirist is writing an “I was born” book? Is this the same man whose “Bowling at Columbine” won the 2003 Cannes Palme d’Or documentary award, then the 2004 Oscar? The same guy whose “Fahrenheit 9/11” picked up the 2004 Cannes documentary Palme?

Moore’s apologia for this leap from “those idiots” to “me” fills the first 30 pages. They’re a bitter take on the wages of a satirist’s success. Not everybody applauded when his films, books, and TV series unveiled America’s pro-weapon culture, its corporate greed, and a health system that works best for the healthy.

After some close calls with Mr. Death, Moore hired nine (count them: nine) ex-Navy SEALS to protect himself and his family. Fortunately. They discover yet-to-detonate bombs on his front lawn and knives in shopping center crowds.

And all because…? Well, back to our autobio. Which explains everything, almost.

From first womb exit Moore’s squalls protested America’s latest zany zeitgeist. Born into an anesthetized, antiseptic, fear-driven Cold War America, he’s “denied” natural birth. Americans have to be protected. Even from life itself. American medical science sends mothers in labor to “twilight sleep.” And substitutes breast-feeding on demand with bottle schedules. “My mother was drugged and I was hungry.” Welcome to the world.

Jump to the 1960s, when the country was hypnotized by its global good-guy role. Mike and his pals spent whole Saturdays gleefully killing each other in war games, taking turns at being the winning American. Until home TV screens shimmered with bloody pictures of real fighting in ‘Nam. Welcome to war.

Then comes 1967: the Detroit police break into an after-hours black club. Protests become riots. Detroit is burning. In Moore’s Flint-suburb neighborhood his friends’ families are suddenly packing up cars with household goods and paranoia. Don’t just stand there,” his buddy Walt yells. “The niggers in Detroit are rioting… They’re going to march here and kill us all.”

Walt was just echoing a hysterical cry that rang across the nation from L.A.’s Watts to Harlem. The self-feeding terror of the late 1960s could even drive a 12-year-old like Michael to ask: “Walt, they’re going to march to here? Do you realize Detroit is 67 miles away?”

By the 1970s Moore’s best escape from this perplexing world was into movie theaters. He drove hours to see new films, docus, whatever’s on board. Because high school wasn’t exactly the happy part of his day. The local assistant principal had lots of rules, like not whistling in the hallways, and other essential stuff. He was also a physical punishment bully. How to get rid of him? Be elected to the School Board, and convince everyone on it to fire him and save the school for its students. In planning this election Moore learned a life-changing lesson: to win you have to grab public attention.

He canvassed all Davison to deliver vote-Moore leaflets. And he did join the School Board. Then went on to start an independent Flint newspaper. To get his pesky ?s to a larger audience.

The late 1980s finds him covering an international conference in Acapulco, where the American Chamber of Commerce plans to teach American CEOs the newest financial techniques. Move businesses to Mexico. Where “Pancho” will earn less, and work more hours than American laborers.

Hey, they’re planning to eliminate America’s working class! Soon General Motor’s CEO Roger B. Moore announces: “the close of eleven of our older plants… the largest job cuts at our Flint facilities.” Where just about every male in Flint works.

How to get the word to citizens in L.A. or Spokane, or wherever? To those people who don’t yet realize this corporate greed thread is going to unravel the American middle class?

How about making a movie!

For two years GM stonewalled his every attempt to interview Roger B., Michael filmed it all. “Roger & Me” made both Moores very famous, in quite different ways.

The rest of the current autobio is uphill: to more films, books, fame, notoriety… and the houseful of former-SEAL bodyguards.

Served with question marks, this is a smart book by one of the funniest loose cannons on the U.S. landscape.