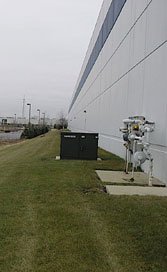 t is three in the morning when the music starts. “Uno, dos, tres, catorce!” Bono’s inane intro breaks into the Edge’s uncharacteristically chromatic guitar work. My wife pokes me.

This has been going on for a couple of months, ever since we moved into our apartment on the Northwest side of Chicago. Now, three or four nights a week, usually at two or three in the morning, our drunken neighbors treat us to U2 and the rest of the American top-ten. Their stereo must be some kind of tubular wonder-machine because the music is not just loud; it is like Bono is screaming at the foot of the bed.

I can’t get upset. There were too many three-in-the-mornings in Rome — piss drunk, yelling about Bush or Palestine or God knows what — when my Irish roommate and I lived in an apartment off Piazza Ragusa. We woke up the neighbors’ baby a number of times. “Tipici Americani,” they muttered.

Typical yuppie Americans, the kind you meet on the train to Naples — drunk and loud. I could see my neighbors weighed down by a 30-pound North Face backpack, knit caps, and the Lonely Planet guide on the seat next to them. “A che ora?” they read from the back flap of the book. Life as a snobby expat was always sweetest when these types mistook me for an Italian or a Czech, anything but an American.

My wife’s groans bring me back. She is a terrible sleeper and I know the music means that the night is over for her. I also have to wake up in a few hours. These days there are no more lazy bus rides or mid-morning interviews or Roman lunches. Now I join my fellow Americans in the daily commute, trucking an hour out of the city to my little five by five foot gray cubicle. American pragmatism — they decide the best place for you to work is in the middle of nowhere, inside a giant white box plopped in the middle of a field. There is a Wendy’s a mile away if you forget to bring your lunch.

I lie in bed tapping my foot. The new Interpol song comes next (their second album seems to show that they are more than a Joy Division knock-off). My wife shifts and twists, strangling the sheets. I can see what she’s saying. It’s a new role for me, but I know I have to stop the noise.

I pace the apartment staring at the old dirt in between the panels of the wood floors. I guess that’s why the rent is so high — there is dirt in the floors, an American rarity. It is one of the reasons we moved to Chicago.

The neighborhood we moved to used to be rough. A few of the other apartments on our street were once crack houses, and around the corner there is a sign forbidding prostitution — a relic of another time, our Trajan’s column. I thought I had found Chicago’s San Lorenzo, and although the communists were not burning garbage cans on the weekends, there were enough punk rockers pouring into the clubs up the block to give the effect. There is also a restaurant that serves decent bucati all’amatriciana.

But these days most of Chicago is quickly becoming gentrified, and the Alanis Morissette that is now blasting through the apartment is evidence of this. I finally find my anger.

I slam my hand against the floor. No reaction. I bang again — nothing.

In Rome, my roommate and I were eventually almost evicted. The next door neighbor, obviously fed up with our late night political ranting, told the landlady we were harboring foreigners. Piazza Ragusa was in a fascist neighborhood; there was a party headquarters next to our building. When the landlady came by, my roommate put on his best Irish charm. In the end it was her husband, sensing the contention to be the product of a neighborly grudge, who let the matter slide. I was sitting at the kitchen table again by midnight: first wine, then sambuca.

My downstairs neighbors still don’t respond to my banging. I don’t blame them. My wife and I imagined that they turned up the music to cover up the sound of their lovemaking. I think about knocking on their door.

I start pacing throughout the apartment, slamming my heel against the floor. Still no response. Finally, I picked up a book off the shelf: “Wim Wenders: My Time with Antonioni.” Whack, whack, over and over. Finally the music dipped. I can see their ears turning to the ceiling, listening to their crazy neighbor.

“Fascist,” they mutter, and the music rises again.

— Peter Simek is a textbook editor and film critic based in Chicago. He spent a year in Rome beginning in 2003.