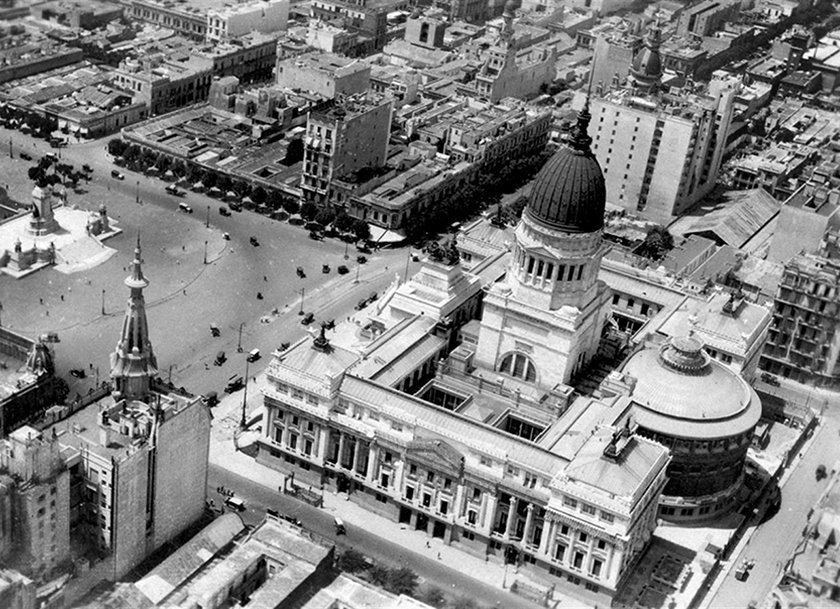 Palace of the Argentine National Congress, designed by Italian architect Vittorio Meano.
I

t was a late August day in 1924, shortly after dawn, when my paternal grandfather Giorgio left Alezio, his native village on a hillock in the Salentine peninsula in southern Apulia. A horse drawn cart drove him and his cardboard suitcase (so full with winter clothes he had to tie it with a string lest the locks should open, spilling its miscellaneous contents), to the railway station, about a mile from the village. My grandmother Consiglia and their eldest daughter Lina saw him off when the steam locomotive puffed away hooting. In a rough rucksack, grandmother had packed some food, which would provide a modest meal for a couple of days: a round loaf of freshly baked hard-wheat bread, tomatoes, a generous cut of ewe’s milk cheese, some olives, a tiny little earthenware jar full of salt, a few apples, a small bottle of olive oil, a bottle of wine.

His first destination was Naples, port of embarkation to North and South America for young Italian southerners, who by the hundreds of thousands sailed to the New World in quest of Eldorado. My grandfather’s final destination was Buenos Aires, the Argentinian capital, where a conspicuous Apulian community had already become established, most of them working in the building industry, a thriving business in the already sprawling city.

The small train pulled in at the station in Lecce, the district capital, 40 kilometers away, about one hour and forty minutes later. From Lecce, Giorgio boarded a “Diretto” train to Naples. He got there early morning the next day.

He had never seen anything that would have prepared him for the breathtaking beauty of the palaces and churches he saw as he trudged his way from the station to the port. The streets and the avenues were swarming with people, horse drawn carriages and cars. Strange trains rolled on railways right in the middle of the streets: “trams” they called them! When he got to the port, the chaos seemed to reign supreme. Thousands of emigrants were waiting to be allowed on board of the ships berthed at the quayside; swarms of peddlers were shouting and selling every kind of merchandise imaginable; thieves and pickpockets mingled with the crowd.

Those three days were agony. He spent the time walking around in the huge docks area, always dragging his suitcase, never trusting anyone.

Asking his way around he managed to locate the agency that would direct him to the “MS Belvedere,” due to sail in three days. The 9,760-ton ship, full load, had been built in 1913 in Trieste (at the time, still part of the Austro-Hungarian Empire) and now belonged to the Italian shipping company Consulich Line. It had been recently restored and converted from a steamship into a passenger-cargo diesel-fueled motor ship. So renovated, the Belvedere could carry 1,190 passengers (74 in second class cabins and 1116 in third class). Giorgio had seen steamships in the port of Gallipoli, four miles west of his home village, but they were cockleshells compared to the “Belvedere” or the other liners at berth.

Those three days were agony. He spent the time walking around in the huge docks area, always dragging his suitcase, never trusting anyone, as he had been warned. His meagre provisions were soon finished, except for the tomatoes and some olive oil. He survived, buying bread rolls from a vendor in the port. He would cut them lengthways in two, squeeze a couple of tomatoes on the lower portion, dust it with a small pinch of salt, sprinkle some olive oil, put the upper portion back on top and eat it. The only luxuries he indulged in were a cup of “caffellatte” in the morning at the bar near the hangar where he slept, and, in the early afternoon, a demitasse of the highly extolled Neapolitan coffee, which sadly fell quite short of his expectations.

The “Belvedere” sailed from the port of Naples on September 1, 1924. Giorgio had learned from the letters his emigrant friends had sent their families from Argentina, of the discomforts of the traveling third class. Though improved in recent years, the conditions of travel for steerage passengers were appalling. Unless it was bad weather, many preferred to spend as much time as possible on deck, far from the suffocating heath, the nauseating smell of seasick people who had little chance to wash properly. And the food was abominable. Day after day, the dark water of the Atlantic was the only sight.

Before reaching Buenos Aires, the “Belvedere” stopped over at Rio de Janeiro, Santos and Montevideo.

On October 6 1924, the ship moored alongside the quay in the port of Buenos Aires and Giorgio disembarked. Immigrants to Argentina did not have to go through the same exhausting and exasperating procedures that were routine at Ellis Island, still they had to pass a medical examination and register with the police upon disembarkation. They would receive a temporary entry permit. Later, a picture and thumbprint would be taken, and, in due course, a “Cédula de Identidad” (identity card) would be issued, which made them permanent residents.

The newly arrived could be housed for some time at the “Hotel de Immigrantes.” Built between 1906 and 1911, it was a huge building with common dormitories, each with 250 beds, dining halls, shared facilities with hot water, a hospital, and workshops where immigrants could receive some training before being given a job. The “Hotel” is now a museum.

Giorgio was lucky. He was a skilled worker (a quarryman, but also a mason and a carpenter) and was welcomed by some friends from his native village, who had migrated there a few years before. They hosted him for a few days, until he found a job, at first as a quarryman and later as a mason. After all, they were not very different jobs. As a quarryman, he would extract blocks of stone from the womb of the earth. As a mason, he would pile up those stones to make a house. He went to live at 3982 Calle Diaz Velez, which crossed the “barrios” (“quarters”) of Balvanera, Almagro and Caballito, where most of the buildings had been built by generations of Italian immigrants.

The wide avenues were crowded with cars and streetcars, and there was the bustling animation of a city of about two million inhabitants.

If Naples had astonished him with its uncurbed vivacity and ebullience, Buenos Aires soon fascinated Giorgio. He had been perplexed on arrival. The dreariness of the bad smelling port, the feeling of anxiety for the uncertain future, and the sea that the debris of the majestic Rio de la Plata turned into a huge uninviting mud pond, filled him with melancholy. But from the very moment his friends took him home, across the city, he was stunned by the elegant buildings, designed by celebrated European architects for affluent aristocratic “Bonaerenses” families. The wide avenues were crowded with cars and streetcars, and there was the bustling animation of a city of about two million inhabitants, already dubbed as the “Paris of South America.”

He worked hard, but the pay was good, beyond comparison with the starvation wages of a quarryman, a mason or a field hand in Italy. He was able to put together some money in a short time. The original idea was that grandmother and the children would join him as soon as he was settled and could provide the money for the passage. However, when grandmother’s mother got ill, Consiglia had to change her plans. At the time, more than nowadays, the burden of care for the elderly and for ailing parents fell on the women.

Giorgio spent almost ten years in solitude, sending money to the family in Italy. When he came back home, around the middle of the 1930s, the family had saved enough money to buy a piece of land to cultivate. For the rest of his life, Giorgio would recall his Argentinian years with nostalgia. He would remember and pronounce with affection the names of places and streets: the celebrated Plaza de Mayo, Avenida de Mayo, Avenida de l’Alvear… He would extoll the magnificence of the Teatro Colon, with its baroque architecture and huge hall, inside which he had been only once (the peanut gallery, of course), on the occasion of a performance of Verdi’s “Aida.” Sometimes he would intone one of Carlos Gardel’s songs he had heard on the radio.

Giorgio died of a stroke in 1943, aged 50, seven years before I was born. Consiglia died of cancer in 1950, at 59, in the same house and on the very same year and day I was born. All I know of them came from my father’s recollections.

Several years later, on my father’s bookshelves, I would find an English grammar for Spanish speaking learners that, God only knows why, Giorgio had brought from Buenos Aires. I saw it as an unwitting gift from a grandfather I had never known. But this is a story already told (Coming of age, in English – The American Mag).