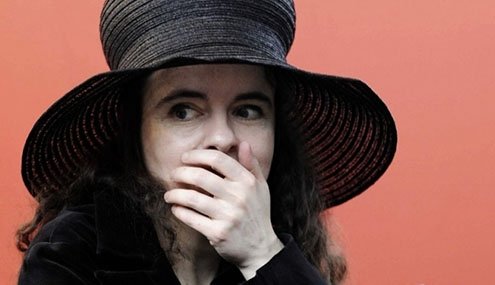 he lucidly electric voice of Belgian novelist Amélie Nothomb recaps the twists and turns of a friendship with a waif-like, aspiring young writer named Pétronille Fanto. Sharply translated from the French by Alison Anderson, “Pétronille” (Europa Editions, 2015) is a brilliant paradigm shift in the alter-ego genre. It’s Nothomb’s face-off with her youthful self.

Pétronille is 22 when Nothomb first meets her. She could pass for a boy of 15 and is definitely no doppelganger for Nothomb (now 50), iconically famous for her Gothic-Glam wardrobe. Not much comfy female bonding here, let alone lesbian overtones. Once a figure of unbridled spontaneity, Nothomb now wallows in “maternal concern” for Pétronille, who seeks self-discovery by taking ever-escalating risks. In fact, she embodies the fiercely independent vitality that was once the older woman’s most vibrant character trait.

In oddly infrequent but intense encounters over 17 years, the semi-fictional Nothomb and the entirely fictional Pétronille share episodic escapades, including champagne-besotted meet-ups in grey London, the pleasures “gay Paree,” and the snowy Swiss Alps. Crisply evocative, comic, yet infused with darkly threatening character clashes, these episodes, though they play out over long stretches, create the illusion of a fast-paced plot. But the meat of the tale is in slow and long-term psychological shifts. While Nothomb increasingly assigns her once-beloved extreme situations to fictional plots, and to characters like fiery, rebellious, untamed Pétronille, her alter ego can’t get enough of living on the edge.

If Nothomb’s champagne verve still shines through in her novels, Pétronille needs the elixir to spur her “heightened state of consciousness.” She’s taken to carrying around a couple of bottles in a thermos stuck in her backpack.

From the moment Pétronille arrives at a Nothomb Paris book-signing in 1997, the older woman recognizes her as a long-time fan with whom she’s corresponded. “It’s you,” she cries, in instinctive recognition of some magnetic affinity. And she’s right: the strange child-like figure exactly replicates Nothomb’s own passion for the very best champagne, downing it with the same swift zest. Perfect, thinks Nothomb. She’s always longed for a companion in drinking, a “comvinion,” to share ecstatic light-headedness.

So there they are: best-selling then-thirtyish Nothomb and young Pétronille, with the author’s obligatory name-nod to Roman Petronius Arbiter. The young woman increasingly dominates her “fussbudget” friend, becoming the arbiter of taste, both within the Parisian literary scene, and in the relationship itself.

After a humiliating London encounter with “punkette queen” Vivienne Westwood — “She treated me like a dog,” Nothomb wrote about the real 2001 meeting —shell-shocked Nothomb calls Pétronille in Paris. She needs rescuing. It’s a surprise meeting, since their re-engagement skips story-line preparation. Still, in Nothomb’s quick-stroke style, it works. Partly because Nothomb finally explains their uninterrupted correspondence —Pétronille’s been sending her manuscripts for comment.

Unhappily, the London section remains this book’s weakest link. It awkwardly combines a savage payback against Westwood’s behavior with a Pétronille-dominated jaunt to the Swiss Alps.

Thankfully, the shift to the Alps is inspired. The two women seem in psychological balance, which Nothomb makes literal. Each skis with one pole while drinking from full champagne bottle in the other hand. “Everything went by in a flash of ecstasy that seemed to last a thousand years.”

Next morning, in their chalet apartment, Pétronille screams that dust mites have kicked up her allergies. Nothomb must carry the mattresses downstairs on her back to shake them out. So it is that the famed author becomes a servant.

Nothomb learns that Pétronille has gone back to living on the edge. She’s performing Russian roulette acts in a Parisian night haunt. Nothomb has always insisted that in murdering her novels’ chief characters she gives their lives more value than “your ordinary death” ever can. Nothomb races to Pétronille’s next scheduled performance, hoping it’s all an act. Otherwise, she risks losing the unquenchable spirit of her younger self.

Can any of us afford to lose that part of ourselves? Good question, here posed by a talented, witty, and very smart author.