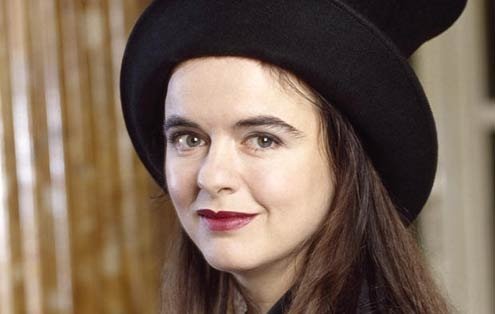 Amélie Nothomb: All about Japan.
F

inally, Belgium author Amélie Nothomb’s 2007 “Ni d’Adam, ni d’Eve” is available in English, as “Tokyo Fiancée.” ‘Bout time, since it’s one of her best and most intense works. Like most Nothomb fiction it centers on youth — the prime petri dish for self-discovery. Though thought made incandescent through act is pretty good reading for all ages.

Did we say “incandescent?” You’ll know Amélie’s book by her look. See that PR persona on jacket covers, in media promos? She’s wearing her four season half-mitt black wool gloves; dark hair accentuates a chalk-white face marked by overdrawn scarlet lips. She’s as abrupt and uncompromising as her most frequently used narrator — herself. She’s her own mainstory: her life and its exploits, large and small.

“Fiancée”‘s a typical Nothomb leap into adventure. This time within the Japanese language, culture and landscape. It’s an account fueled on every page by crisp, straight-to-the reader prose.

Here’s Amélie-protagonist, opening chapter one. She’s decided: teaching French is her best shot at learning Japanese. Surgically excising her back and side stories — not to the bone, but to the very marrow — she begins at a point most authors reach in chapter three. “Fiancée”, Chapter one (lines three to five): she places a supermarket bulletin-board ad, and immediately finds her student, Rinri. In just a few pages he’ll become co-protagonist, lover, and future fiancée. Amélie doesn’t detail her arrival in Japan, or why she’s studying Japanese. She plunges into the many, often unexpected lessons learned.

Together Rinri and Amelie explore each other’s culture and language, and by chance or fate are doomed to investigate the infinite meanings of that emotion, for which both French and English have but a single, uninflecting word: “love.”

In this novel’s return trip to the Japan where Amélie lived until age five, she discovers, at 21 (it’s 1989), that Japanese offers two quite different words for “love.” Koi and ai. The first is sexual, romantic, self-indulging passion: her feeling for Rinri. She’s had past flames, but Rinri provides her first comradely, joyous, playful, yet deep affection. Since cultures are born both to blend and clash, Rinri’s contrasting passion for Amélie is ai: an ennobling, self-sacrificing, devoted emotion. Tuned to matrimony. Men do adore being married.

Yet despite this lovers’ divide, both Amélie and Rinri reach self-revelation through the events that mark their relationship. They climb Mount Fuji. Rinri is exhausted by the feat. Amelié typically transforms it into the sort of extreme adventure through which she can take her own measure. Her feet sprout wings on the arduous climb and descent. “I am Zarathusa,” she exclaims. Zarathusa — who triumphs over worldly obstacles, and disdains standardized morality.

No surprise she rejects Rinri’s marriage proposal. She agrees to be his fiancée, a word based on faith and loyalty. But marriage? She declares matrimony immoral: a prison, the death of love, the murder of both koi and ai.

At this dead end, does the couple separate forever? Not yet! Amélie still has to begin a year’s work contract with a major Tokyo corporation. Which as a matter of fact she already mentioned in an earlier fiction. So as author she’s kind of stuck with that scenario. And now the you finally figure why she needed to polish her Japanese. Reluctantly, to explain why she gives the clearly futureless Rinri-Amélie an extra year, our author slides in a few back and side-story details.

So it’s pretty late in “Fiancée” when we realize this book is both prequel and parallel to her earlier best-seller “Fear and Trembling”. Which was near-diary account of systematic humiliation by her Japanese office manager, and of her spiraling, suicidal depression. In “Fear and Trembling,” however, we did not learn her after-hours are spent in the apartment shared with Rinri. So just as she totally skipped his very name in the earlier work, in “Fiancée” she scantily refers her corporate daytime.

That’s Nothomb: tossing excess prose baggage. In order to shout out: what Rinri and Amélie have learned about their individual selves. At contract’s close, Amélie returns alone to Belgium. Exploring personal growth through experience is her true work — a writer’s job, and her future. In a few years, Rinri will consummate his dedication to ai, in marriage — to a very different native French speaker.

In time both Amelié and Rinri will realize that in addition to koi and ai there’s at least one other kind of “love.” Found within the ancient Japanese culture. That eternal bonding between two Samurai, which powerfully forms and informs the individual. It has no need of geography’s stage, nor the presence of the beloved. This is Amélie’s final Japanese lesson; it arrives as piercingly and true as a Samurai sword to the heart.