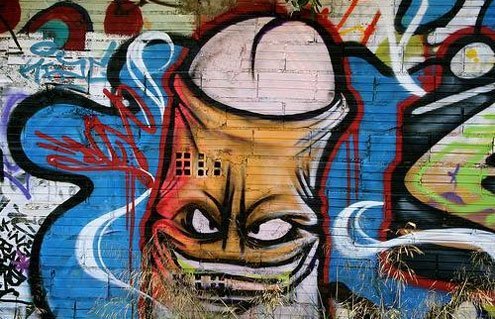 The message may not be clear but it's colorful.
T

he shop that sells tiny batteries for my aging watch has gone bust. This is too bad since I had trooped all the way there, and my watch has read four minutes to 11 for four days now, a suggestive if unproductive time.

There’s a rusty grid over the entranceway and elaborate graffiti on the door itself that seems colorfully (if rather improbably) to invite a penis to enter. A crooked sign behind the actual glass says “Hours.” But there are none.

Out of business, says a dapper man outside the store. He has apparently watched me squint at both door and vivid penis, perplexed. I assume he takes me for a foreigner.

Thank you, I reply.

Do you wear a watch? He asks.

This is an odd question since I am wearing my watch. I hold it up for him to see.

He nods approvingly. Try the Street of the Triumphal Elves, he says.

Or this is what I think he says: Triumphal Elves. Or maybe it’s Elfin Triumphs. Triumph I am sure of.

Near where I live is Street of the Three Clocks, but there are no battery stores there. There are, however, many penis scrawls, another forthcoming Rome trait.

A few decades ago a city-wide campaign announcing the renovation of the Sistine Chapel was systematically defaced by an array of arrogant if resplendent penises scrawled over the dome of St. Peter’s (pictured in the ad) in a way suggesting that one of more such organs floated over the church on a permanent basis. Some of these penises came with qualifiers, as in, “The Church is a Penis!”, unnecessary since the message was clear.

Other penis drawings, usually scrawled on political posters, speak more directly to the organ’s apparently insatiable energy. Or to its relationship to this or that soccer team, always intimate. One artist, in a specific bit of boldness, tried making a penis look like an ice cream cone, with only dubious results. This ice cream penis was on Street of Amba Aradam, which was named for a 1930s battle in which invading Italian troops attacked Ethiopian partisans with flamethrowers, sealing the ones they didn’t kill inside a mountain. The connection to the organ or to ice cream is unclear.

I did, finally, reach Street of the Triumphal Elves, which was near Street of Suspended Water and not far from Street of the Hare and Street of the Sixth Mile. The man was correct: Amid the hares, elves and miles was a store named, “We of the Batteries!” It claimed to sell “every battery that can possibly satisfy you,” and this included a tiny battery that satisfied my watch, which immediately left behind four minutes to 11 and sprinted to Noon and beyond.

But the bus that had taken me there was not the same bus that could take me close to home. The sales clerk had no idea. “Ask me more about batteries,” he said.

Instead, I went to the second of the two bus stops, beyond the first of two mobile telephone ads (which read: “For only 4 more euros a month… SUCK MY PENIS!” — not necessarily truth in advertising, but certainly energetic.) Under this billboard, I found a man with a cigarette who, it seemed to me, perhaps because of the cigarette, belonged to the surrounding area.

But he spoke first: What time is it?

Proudly fixed, I told him.

Then I asked directions.

What the penis do I know? he replied loudly. In this penis of a town the buses go nowhere and they never pass.

For future reference, the bus stop is on Street of the Hare.