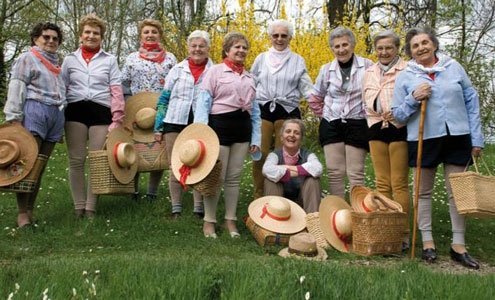 The "girls" are proud of their shared past.
T

he dress code is uniform: tights, hot pants, and a button down shirt; sleeves rolled up and tied in a knot just above the waistline. The headgear is a straw hat, with a wicker basket in hand, and inside the basket booklets with lyrics and scores.

Meet the choir composed, among others, of Norina, Renata, Anna, and Wanda. There are 12 in all, and they began singing formally in 1976. “The girls,” as they call each other, range in age from 76 to 84. Every Wednesday they gather at Wanda’s home in Bentivoglio, on outskirts of Bologna, to rehearse. Their outfits haven’t changed since the 1940s and 50s, when they toiled together in northern Italian rice fields.

“It was practical in the paddies,” says Renata. “The thick tights protected our legs from mosquito bites and the irritating rubbing of the rice plants against our skin.” In Italian, they were known as mondine, huskers. Before Italy evolved into an industrial society, it depended on agriculture, and the toil of women. Rice harvesting was a seasonal job that drew hundreds of thousands of mostly women workers, particularly during World War II. They picked and cleaned rice from the beginning of May to the end of June.

Since rice traditionally grows in marshland, the women stood with their legs immersed in water and their backs to the sun for most of a 15-hour day. The job is still considered among most arduous on earth, often undertaken under inhumane conditions.

Since the advent of rice combines, paddy harvesting has largely disappeared in the West (though it’s still common in parts of Asia and Africa). But from the 18th-century into the mid-1950s, an estimated quarter-million workers would descend each into Italy’s paddies, most in irrigated fields along the banks of rivers in the northern Po Valley. In fact, Italy’s first collective bargaining agreements and legal workday limits, established in 1906 by early labor unions, arose from the demands of beleaguered rice harvesters.

But law, particularly as it applied to women, was often ignored. “Our team leader used a cane if we ever dared to try to stand up straight or to punish us if we made mistakes,” recalls Renata. Singing was a way of getting past the agony. “It was uplifting. It was a way to forget about the pain.”

Adds Wanda, the leading lady of the choir: “We sang about everything: love, war, partisan fights, food, our daily life. We keep on singing now as a way to pass our history down to younger generations. That way they know more about fight for worker rights, about the war, about partisan resistance.” The choir members are among the last survivors of a pre-combine era in which each hectare (2.4 acres) of the paddies demanded more than 1,000 hours of human work. By the late 1950s, manual harvesting had all but disappeared.

Twentieth-century mondine usually began working in the fields at age 14. “That was the legal age to get started,” says Renata. “Our mothers had fought the [age] fight before us. The generation before us entered the swamps at eight or nine years old.”

The lyrics of one of their songs recounts the story of a day of work that begins at dawn and lasts until dusk, with the food supply a single slice of bread. There were no lunch breaks until another labor uprising led to the creation of the mensa, or canteen, in 1943. “We’d get a pot of rice and beans, and it wasn’t unusual to find a dead eel or some bugs,” Renata continues.

“Being in the swamp and singing was like being in a huge theater,” adds silver-haired Norina dreamily. “Imagine a group of 2,000 women divided in groups of 200 or 300 people. Singing was a form of story telling.”

The cover of her lyrics book, and those of the others, contains a youthful snapshot. Imagine Norina as a young Silvana Mangano, age 14, her hands planted on her sides, staring straight at the camera (Italian actress Mangano portrayed a husker in the 1949 film Riso Amaro, “Bitter Rice”).

“You were beautiful,” I tell her.

“Oh yes,” pipes in Yvonne, coquettishly. “We were pretty all right. You should have seen our boyfriends, who worked in nearby fields, when we’d parade in front of them in our shorts going home at the end of the day,” she giggles.” She’s proudly kept a pair of the shorts for half-a-century.

Renata, the eldest of the group, has a more combative spirit. She took to the fields in 1943, also at age 14. She was a teenager as fascism waned (Mussolini retreated to the north, until he was arrested and executed in mid-1945). Renata proudly shows off a 1980s of her discussing women rights at a local Italian Communist Party meeting. On the hand-painted walls over her head are scrawled quotes in defense of women’s rights made by revered Communist leader Enrico Berlinguer, who died in 1984.

“When I was nine I wanted to enter fifth grade. That level of education wasn’t offered in my village so I asked my dad if I could enroll in the next village. It was 1939 and he had been drafted to go to war. ‘No way,’ he told me. ‘You’re a woman and you’ll be a mondina. Given what will be asked of you [in life] you already know too much.’ His words made me want to learn and read and understand and fight. And I’m still learning now, and still fighting now, at 84 and with a cane in hand. You see, there is still so much work to be done.”