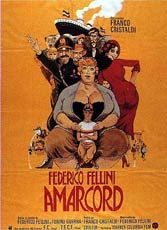 Fellini’s mercurial remembrance of things past, specifically his fictionalized Rimini childhood, is a dictionary of visionary spare parts: a motorcyclist who roars through the city at intervals, a mad uncle who climbs a tree and bays for a woman, a protagonist (Titta) who nearly drowns in a shop owner’s Herculean cleavage.

As always, Fellini produces incomparable moments. One includes townsfolk rowing out into the Adriatic to watch the Italian liner “Rex,” built by Fellini’s craftsmen from celluloid strips.

In all, it’s a homage to the incipient bright lights, big-city future it would take a war to reach.