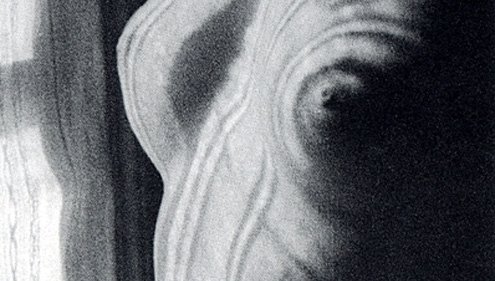 reasts were Amanda’s growth industry. Both of them. She was a good promoter. Ten cents for one, 25 cents for a twosome. She considered these reasonable prices. They were non-negotiable unless she giggled, which was rare. I never knew why they were reasonable or what made her giggle.

Amanda didn’t like questions. Mostly, she just talked to me. But that was later.

We lived in an affluent section of Washington, D.C. There were parks with water-fountains and bicycles with speedometers, businessmen and bureaucrats in Stetsons, cars with rakish fins and bug-eyed lights. Doors remained unlocked at night. Girls wore pleated skirts except when they didn’t.

Amanda’s chest has its own history. The New York Times recently spent thousands of words to newly elucidate the mysteries of sexual excitement. Female arousal, it explained as if sharing North Korean secrets, was more “nonexclusive” than the male variant.

For girls, it could be a bright apple. Or a waxing moon. Or speech well-spoken.

Sexual attraction — “the tangled spangle of its weave” — was libidinal alliteration stripped down and transferred to famished genitalia. No please necessary. Keep the change.

Nowhere, however, did the newspaper mention squirrels.

This is a serious omission. Hence Amanda.

Amanda lived four doors down from a family called the Mackerels that had a small replica of a sailfish over their door. Mr. Mackerel, who sold insurance, was also called Mr. Fish. His wife, Mrs. Fish, originally came from Egypt, but had lost everything (she said) when nationalists built a canal from pyramids and left her country to a man oddly called No Sir. The salad days, she announced, were gone forever. Her hands smelled of ammonia.

No Sir will be gone soon, Mr. Fish reassured her. How exactly salad fit this mix I didn’t know.

Mr. Mackerel’s son Barry introduced me to Amanda. Barry was known only as Trout.

One day, Trout told me, “OK, time for you,” and ushered me swiftly to Amanda and her commercial breasts. Trout and Amanda had first met in the alley that ran narrowly behind both their houses and pushed past mine. They had apparently entered into a sophisticated business arrangement. All the boys along the alley were required, as a kind of preemptive tithe, to contribute to Amanda’s burgeoning commerce.

“About what?” I answered.

This was not the correct answer, but I might have been forgiven, at least the first time, because Trout asked me the question while I was perched atop the telephone pole with my binoculars, probing the swift and nervous life of squirrels. Squirrels on fences are tyrannical jesters. They hoard and scheme and pause before revising their immediate goals. Nuts, I knew, were merely a pretext. These were vigilant little kings foraging for secrets. They never slept.

“Are you looking at dumb animals again?” asked Trout.

“They’re not dumb,” I answered.

Our conversations were always prodigious.

Trout coaxed me down from the pole, asked me if I had a quarter, and took me to the park, where Cyclops was waiting with Amanda.

Trout’s best friend was named McKenzie, but was known as Cyclops because no one knew what the word meant or he had a birth mark, or both. Cyclops always walked Trout through the neighborhood after school. When I’d ask what they were doing, Cyclops invariably turned to me and sneered, “Eat me, fagatron.” Try as I did, I couldn’t decipher this directive and returned to my binoculars. I watched as they threw small stones at cars in a sneaky slicing motion so that it appeared they were just twitching their wrists.

When the local policeman appeared, which he did from time to time, Cyclops yelled “Yankee!” and they hid in the bushes. This confused me because I’d named my favorite squirrel “Yankee” and never fully understood what Cyclops and Trout would want with a black squirrel.

Amanda called squirrels “rats with tails,” or did that day, which made me feel bad for “Yankee” and also made me sure that I did not want to touch her breasts.

When Trout pushed me, his allergic hands pulling back after each shove, I saw her in a clearing, coughing. My squirrel companions hustled through piles of nearby leaves.

Whatever Amanda said, they were not rats. Never mind her embarrassingly naked chest. I would tell her. I just needed the nerve.

“Why do you call them that?” I demanded finally.

This wasn’t at all what Amanda expected. She was silent for a moment. I knew it; I had vindicated my furry friends.

“They… they… don’t have names,” she replied slowly. Her face had a pimple. I shouted at it.

“Yes they do! I heard what you called them.”

Her expression took a new strange turn, into amazement. She looked at Trout.

“Aren’t you going to touch them!”

“First, tell me why you call them that! They don’t deserve it.”

Amanda grabbed my hands and giggled. I was cute and strange, she said. So much so that I didn’t have to pay.

Trout, her agent and observer, intervened. “Hey,” he said poignantly.

“How come him?” whined Cyclops, nodding at Trout.

By then my tiny palms were on Amanda’s breasts, where she’d placed them.

She had nonexclusive brown eyes.

Later, after “Yankee” went away, I found another squirrel to spy on. Trout and Cyclops (“Eat me, fagatron!”) objected, but I named it Amanda.