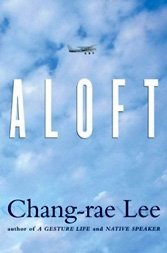 There’s a good deal of Richard Ford in Lee’s latest novel. Jerry Battle, a retired Long Islander, is adrift in family loose ends. His 85-year-old father Hank is retired and grouchily half-mad. His son Jack can’t manage the family business without missteps. His daughter Theresa is sick, mysterious, and very smart. His Puerto Rican girlfriend (Jerry’s Korean-born wife committed suicide) has walked away because she simply doesn’t believe aging Jerry is any longer connected to the concrete. But he is. So much so that he’s bought a Cessna and learned to fly, metaphorically freeing himself to examine the debris field below.

What Lee has in common with Ford is optimism. His collection of suburban souls (he among them) are fractured but not hopeless. Flying is not an escape but a means to deal with family exigencies while at the same time aware an alternative of sorts exists — the open spaces of a prop plane’s seemingly unconfounded air. Until a storm, Theresa in tow. Which is when Jerry says, “I’ll go solo no more, no more.” Lee graduates the story to Battle’s decision in much the way passengers on plane experience turbulence, waves of shock, fear of death, and finally the relief that comes with sunnier air. For as long as it lasts.