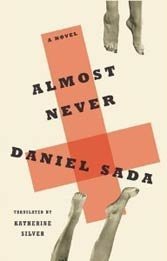 By Daniel Sada, translated from the Spanish by Katherine Silver

The story? How about the (mis)adventures of a randy and gangly “almost thirty” agronomist named Demetrio Sordo — referred by Sada as “the big guy” — who, unsatisfied with his plodding day-to-day life in 1940s Oaxaca, takes to yum-yum whoring, which in rough order yields a prostitute girlfriend Mireya (a fellatio-keen “dark-haired wench,” with whom he elopes), an assortment of maternal and auntly interventions, and a less-than-chance meeting with decorous Renata, a mother-shielded “rural lass,” aka “the green-eyed girl,” introduced as the goal of any middle class male Mexican’s mating intentions (as in proper wife and mother). If only Demetrio Deaf (sordo means deaf in Spanish) weren’t every bit the “sexual agronomist,” eager for the “good parts” in any relationship (“Our lover’s level of abstract thinking never went very far.”)

Start to finish, Sada employs a mischievous, sarcastic, and biased third-person person narrator — herein the Rabelaisian heritage — to ensure the reader gets into the fulsome comic book flow (“… we should picture a hovel of a room crammed with furniture, in the middle of which was a powerful radio…”). The novel is like that hovel room’s radio, powerful, but also clever, crammed, compassionate, and deviously funny. Words and people as spasms and emissions.