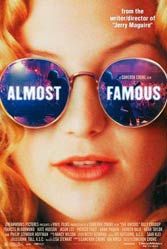 Cameron Crowe’s labor of love is a tender memoir about rock’n’roll and growing up fast. Patrick Fugit is William Miller, a teenaged critic wannabe in the glory years of late 60s, early 70s music. “This will change your life,” Miller’s sister says of The Who’s Tommy.

Those were the days.

Despite his mother’s hesitations (a prim-to-the-hilt Frances McDormand), William goes on tour with an aspiring band (Stillwater, led by Billy Crudup’s character Russell Hammond) after conning Rolling Stone magazine into thinking he’s a mature, professional freelancer (Crowe did much the same). Along the way are Penny Lane (Kate Hudson) and groupie (“Bandaide”) buddy Polexia Aphrodesia (Anna Paquin). Both are bittersweetly happy and often confused.

It’s all more innocent than it sounds because Crowe (“Jerry Maguire,” “Vanilla Sky”) is far less interested in drugs, sex, and rock’n’roll than love, life, and music. A delight.