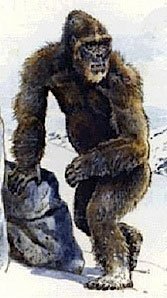 Yeti: big man with lots of hair who speaks no English...
B

efore the Axis of Evil and after we disbanded the Outer Space Club, we got wise.

Who could care less about shining stars except for dumb girls? — this was Grover talking — and who needed dumb girls when you had smooth stones and bikes and tiny insects you could squish in your hands? Grover, who sang soprano in the choir, had arrived in our Washington, D.C. neighborhood from Argentina, which he said was an old South American country filled with steaks and pampas.

Enough was enough: We formed the Alley Allies. It was Thanksgiving 1960.

The Alley Allies pledged to protect the alley from yeti and pampas and other evil pretenders. We made a pledge — called the Gory Oath — and promised to crush insects and stay away from all girls, always.

Pete, who was the son of Mr. Charles, who had invented the laser (which, Pete said, was a kind of bright light that made no noise in space), told us we could set up shop in a back room of his basement, which was dark and had worms. It also had an old mattress that we appropriated for our “total command center.”

Mr. Charles, meanwhile, occupied the other part of the basement, where he kept beakers, books, and a big frame on the wall that announced he was a Columbia laureate, which sounded like an expensive plant and was also spelled funny.

The Alley Allies, said Pete, wouldn’t be your average group of small boys with thick glasses sipping on sodas in the garage.

This would be the truly tough club. The whole neighborhood, he said, would grow to respect our “prowess,” which he explained was like a battering ram but made from raw bone. “To be an Alley Ally you have to be mean to everyone,” he said, explaining his evolved philosophy, “so that no one thinks that maybe you look weak or trust them, like parents or, like, you know, Mom.”

Not only would the Alley Allies be truly monstrous to everyone, they would also climb telephone poles and perform random acts of terrible urban vandalism, such as, say, kick a fence-post or whistle at young women idling at the bus stop. If you whistled at a girl, said Pete, she’ll never be a Mom. It was scientifically proven. We didn’t know just how this worked (or much else for that matter), but assuming it did our wildly out-of-tune vibrato spayed a few dozen potential mothers.

One day Mr. Charles ordered us out of the Alley Ally Command Center. “All four of you, now!” he shouted.

Mr. Charles was standing next to Mrs. Praddle, an evil mother who owned a daughter named Cassie, who was almost 13, wore make-up and was dressed in a silly plaid skirt.

Oh no, we thought. Pete’s prowess had been stolen. Probably by a girl. Maybe even by a Mom.

Without saying another word, Mrs. Praddle escorted us two doors down, to her lot, where Cassie was waiting. Cassie gave us rakes and pointed to the leaves.

Don’t worry, whispered Pete, promising to get his prowess back.

He did, eventually, but he also ended up kissing Cassie, betraying the Gory Oath. Grover, in tears, decided Pete should be exiled to a place with pampas and yeti and no girls. “Someplace near Zanzibar, where they speak Pig Latin,” he explained.