All the President’s Men 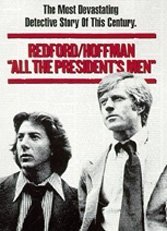 The most durable virtue of Alan J. Pakula’s Watergate scandal movie is that it keeps the stars to the story. Considering the magnitude of those stars, Dustin Hoffman as Carl Bernstein and Robert Redford and Bob Woodward, both young men at the time, that’s a meritorious feat. The film follows the dogged reporters as they gradually uncover what even they don’t wish to believe: That the president of the United States has repeatedly lied, cheated, and deceived.

The film (parts of it shot in the Washington Post newsroom) has a documentary feel and a honest thriller’s pacing, more than anyone had a right to expect given the charged material. Hoffman and Redford are by turn decisive and vulnerable; reporters, highly competitive by nature, bicker and misunderstand each other, often by choice. While the Nixon presidency is never mocked its follies are laid bare.