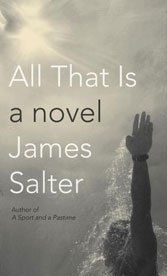 Salter’s first novel since 1979 covers a half-century arc, its narrator Philip Bowman striding pilgrim progress-like through decades of postwar American social, political and sexual upheaval. It is a generous life-and-times story that begins in wartime but acquires heft as Bowman pushes through youth and into midlife, with work, friendships, and love affairs serving as tributaries to one man’s confident adulthood: “… the life that had been opened to him and that that he had owned.”

Salter, born in 1925, is among the most gifted but least celebrated American authors to have emerged from an interwar generation that also produced the likes of Philip Roth and Norman Mailer. He possesses a naturally cosmopolitan view of life’s values and a preternatural gift for storytelling. His alter ego Bowman (born in Summit, New Jersey in 1925) is a Harvard graduate who joins a Manhattan publishing house and sticks with fiction for a lifetime. But it’s the women, Bowman’s first wife Vivian, his London love Edina, his younger flame Christian, that propel the action and give the novel its pulse. Salter’s lovemaking scenes are thrillingly good because they’re simple. Arousal is fierce but never vulgar (“Lying this close he could feel her complicity.”) He unabashedly adores women and he fleshes them out with an old school pleasure and deftness. Toward the end, Bowman tours Paris with the daughter of former lover Christine: “The Paris he showed her was a city of sensual memories, glittering in the dark.” That might go for the whole of the novel, whose sensual memories are its best. What distinguishes Salter from, say, Richard Ford (among his admirers), is that he’s relentlessly hopeful. As are his people.

Those accustomed to the terse clarity of Salter’s best short stories may see this vaster, detail-soaked landscape as too chock. But Salter remains Salter, alert to the nuances of dialogue and meticulous language. In the 1980s, the still-elegant but fading publishing world is, to Bowman, “a pair of beautiful, bone-shined shoes owned by a bankrupt man.”

Throughout, “All That Is” is credible, generous, and honors Salter’s straightforward epigraph: “There comes a time when you realize that everything is a dream, and only those things preserved in writing stand any chance of being real.” His preservation and recollection makes its own breaks, many of them memorable, eventually yielding the wholeness intended by the “All” of the title.