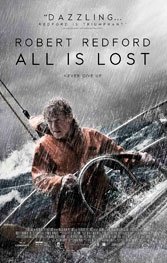 “Ask not for whom the bell tolls,” wrote the poet John Donne, and Robert Redford, the nameless, aging yachtsman in director J.K. Chandor’s survival tale, seems to have the rhythm of the phrase memorized. Here he is, ingloriously marooned in the Indian Ocean between Sumatra and Madagascar, his boat first swamped, then capsized, and finally sunk. All that’s left to him is a soggy life-raft and the hard resources of a man who’s not quite sure just what’s befallen him but who very much wants to survive. Chador opens his tale with the yachtsman’s final farewell, making the long flashback to the struggles that precede a seemingly hopeless exercise — until the magnificently composed Redford begins turning all acts, gestures and choices into specific forms of drama.

The marooned formula is as tried and true in space as it is on oceans, but what makes Chandor’s take memorable is Redford’s understated but unwavering commitment to a the character of a man who recognizes the painstaking odds against him while never giving up, each day a sort a invention that undoes forgone conclusions. “I tried to be true,” he says as part of the sullen message-in-a-bottle confession that opens the film and represents its only speech. The rest is an encyclopedia of the physical act of survival, with Redford’s face and gestures carrying the whole weight of his increasingly threatened world.

Aside from occasional (and ill-advised) bits of soundtrack, heavy on cello and harp amid schools of glistening fish, all you get is a man trying to make ends meet when all does appear lost, salvation repeatedly and teasingly denied. Donne’s poetic bell tolled for all those foolish enough to ask for whom it was ringing, and the cut off yachtsman, at first stalwart, later parched, is very much a metaphor for the many risks of such a question.