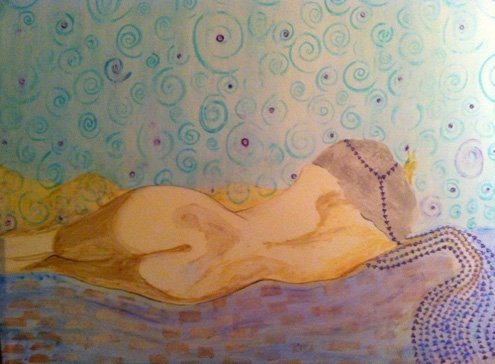 The intimate act of painting has reacquired centrality in the author's life.
A

s a girl, I called myself an artist. Naturally, when it came time to go to college I chose to major in fine arts. I did well and although I abhorred the hierarchy of the art world I was able to ignore it and fit in. My professors encouraged me, a prestigious art program accepted me into its scientific illustration program, and my portfolio slowly grew. Then, quite by accident, I became a mother.

Faced with the responsibilities and anxieties of motherhood, I decided becoming an artist was a “silly notion” and set it aside, along with my portfolio. Not knowing what else to study, I dropped out of college, later taking a museum desk job at the very institution that had accepted me into its art program. I wasn’t bitter about having put my artist dream aside. I had a job, good benefits, a steady income and a stable life. I’d grown up.

For the next 20 odd years I lived life as an adult, sans art. I married, had more children, bought a house, sold a house, bought another, made money, paid taxes, belonged to a “club,” bought more things, invested money, owned a business, fit into society, collected other people’s art, divorced, went back to college and graduated, volunteered, and sent children off to college. Adult life wasn’t so bad.

Yet just a few days ago, 23 years after tucking away my portfolio, I sat on a deck overlooking a large pond. The deck will potentially be mine, as well as the tiny hobbit house attached to it. I chose my new home based on its peaceful setting, cheap price tag, and artistic feel — particularly the window that overlooks the pond, under which I can place my easel.

While examining the yard and pond, and feeling the uneasiness of my pending financial responsibility, I recalled a conversation I had with my ex-husband many years ago. After awkwardly proclaiming his newfound love for a co-worker, a very young woman closer to our daughter’s age than his, I balked. “You’re crazy,” I said. “She’s a child.” He raised his voice. “She’s very mature. She even owns her own house!” He then hung up.

Like many people brought up in Western culture, he equated financial, educational and social success with “maturity.” Likewise, the United States government sees anyone 18 years or older as adult. Adulthood is represented by paying taxes, voting or applying for a credit card or loan. For most of my life I, too, believed in a set of conventional notions associated with what it meant to be grown up and a member of “adult” society.

Nowadays, though, I’ve had a nagging feeling that the role was a ruse.

My doubts led me to do research into the ideology and philosophy of adulthood, ravenously reading book after book. Did buying a new home solidify my hold on adulthood? Did it mean I was a successful adult? Did responsibilities alone make us adults? Did investments, holding down a good job and paying bills come with adulthood built in? What was it exactly that made one adult or grown up?

My endless reading led to one conclusion. The answer is relative. No one philosopher, doctor, priest or astrophysicist has a satisfactory answer, only opinions. While some, the government included, tie adulthood to social and financial responsibilities, others see it differently. Jungian analyst and author James Hollis defines growing up as “taking psychological responsibility for ourselves,” not just economic and social responsibility. “The chief disorders of our time,” he adds, “are the fear of loneliness and the fear of growing up.”

Thankfully I don’t fear loneliness. When I feel it, I don’t run from it. As for growing up, that’s another story. I don’t know with any certainty that I’ll ever truly feel grown up regardless of my financial status, education level, or how I handle the anxieties associated with status. Whether I’ve actually “taken psychological responsibility” for myself is a question likely to live inside me for the rest of my life.

But who was the woman who returned to the art? Was she the visionary, grown up little girl who decided economic success and social status wasn’t all there was to living? Or was she the inner child within the adult who decided to pull the portfolio out of the closet and call herself an artist? I don’t know. I do know she’s made a choice, and it may be the most adult one ever.