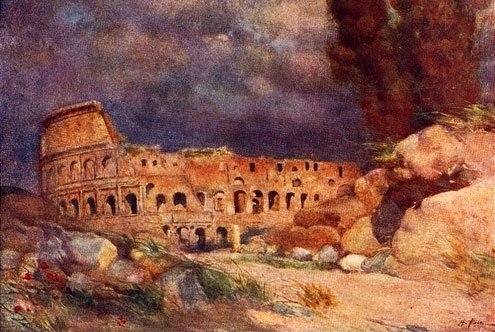 Never mind your shoes, focus on the bigger picture.
F

or the sensitive soul, few places are as rewarding as Italy, or as challenging. There’s the country’s impossible beauty. If you’re the kind brought to tears by a painting, a sculpture, or even a bucolic scene — olive grove-covered hills spreading beneath a medieval stone town, say, or a herd of cows, Alpine bells ringing, crossing a snow-covered mountain — then be forewarned. Italy might make you constantly watery-eyed.

Big cities add specific sights to the grander scenery. Take Rome, which novelist Henry James once called a city of “aesthetic luxury.” Put aside the obvious opulence of designer boutiques at the Spanish Steps, the city’s real opulence is its embarrassment of riches — l’imbarazzo della scelta, as the Italian say it. Art collection? You’ll have to choose between the Borghese or the Barberini, among many. Food market? Today Testaccio, tomorrow the Circus Maximus, and the list goes on. Stunning views? How about St. Peter’s or the Pincian hill? The volume is overwhelming — and, yes, luxurious.

If your eyes become flooded, there’s always that other sense the Italians enjoy and constantly talk about: taste. I’ve joked (and written) about the Italian passion for food before, but every day I see it in a new way.

Take lunch last Saturday. My friend and I arrived late to join family friends of hers at a restaurant, and by the time we got there they’d already eaten. Half in jest (but not really — Italian children know their food), I asked the 11-year-old daughter what she recommended. Her eyes lit up. “Ho mangiato i pici con sugo di carne,” she told me, referring to the local pasta with a hearty meat sauce. “Era spettacolare!”

And, yes, the pici con sugo di carne deserved her praise. They were delicious.

That passionate approach to indulging the senses is, of course, an Italian trait that many fall in love with. And it’s contagious. In recent months I’ve found my prose bubbling over and my eyes lighting up over everything from Byzantine mosaics to mozzarella di Bufala, Bernini sculptures to truffle festivals. For better or worse, I’ve never been known to keep my feelings in, but while cubicle living and rat-race expectations once threatened to flatten my inner excitability, Italy has, for better or worse, indulged it.

Of course, that doesn’t just go for the good.

If this country uses all five senses to enthrall you, it can also use all five to knock you down.

Living with daily frustrations means that everyone, even the most sensitive and easily-flustered, must learn patience. Or at least learn to constantly expect trouble — which, of course, also means being pleasantly surprised when a simple task is, in fact, simple.

I knew I’d come a long way when, last week, I needed both to send a fax to the U.S. and buy stamps. The post office was closed and the tabaccaio had run out of stamps, and so I walked to a store up the street that had a big sign outside reading “Stamps, Telephone, Fax.” Although I should have known better, I expected that that meant that I’d be able to — of all things — buy stamps and send a fax.

But when I asked the owner if he had postage stamps for a U.S. mailing, he looked at me like my neck had suddenly sprouted another head.

“No. Non guadagniamo nulla dalla vendita di francobolli per l’estero,” he told me — the overseas stamp-selling business was apparently no longer lucrative. Refraining from asking why the store continued to advertise stamps, I asked about the fax. “No, non agli Stati Uniti,” he said. Maybe the phone call was too expensive. Since nine out of 10 customers to the shop were foreign tourists, I found the replies a little strange.

Three years ago, when I first arrived, this kind of incident, particularly coming at the end of an hour spent specifically trying to finish two important errands, would have left me near tears. This time, I smiled. “Okay, grazie,” I told the man. He smiled back.”Prego, cara,” he said. I left shaking my head, but cheerfully.

The best metaphor still comes from a former roommate of mine. She had returned to Rome from a trip and was dragging her suitcase up our cobble-stoned street just as the morning sun was making its way over the Coliseum.

As she was thinking of how nice it was to be back, she walked right into a pile of dog excrement.

Living here isn’t just about the extremes. It’s also about how, in each situation that comes up, you have a choice. You can dwell on your suddenly messy shoes, or shake it off, raise your head, and take in the stunning sunrise.