All Days Are Night 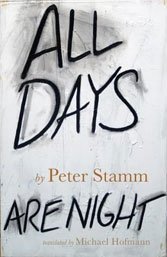 By Peter Stamm, translated from the German by Michael Hofmann

The carpentry of Swiss novelist Peter Stamm turns out characters of average identity and middle class solidity whose desire to acquire essence — substance in the eyes of the self — remains in doubt despite life wakeup calls. Here, successful TV host (but failed actress) Gillian is vacantly married to Mattias. But the union is instantly mooted — a car crash kills Mattias and leaves Gillian disfigured. Her camera-ready looks vanish (“She saw eyes, eyebrows, mouth, but they formed no whole.”) Faceless, at least for a time, she’s a perfectly damaged Stamm orphan, an anatomically humiliated 35-year-old woman who even before the accident disliked herself her mirror image, “as if her face could already sense its destruction ahead,” and who afterwards sees life — “so easy to destroy with a moment’s inattention, a false move…” — as the sum of its absences.

Her mangled story is soon joined with that of Hubert, a quirky photographer and painter who TV Gillian once interviewed, and even tried to seduce. Nearly a decade after Gillian’s accident and with Hubert facing his own woes, the two wounded wanderers are unexpectedly reunited at resort hotel where Gillian now works and separated, crisis-stricken Hubert arrives to give a show. Their awkward ties are revived, if not made hopeful, with love in sight, or if not love at least personal transformation. But the gulf between what seems possible and what will be never narrows to a stream in Stamm’s shaky world. To Gillian-turned-Jill, now well into her 40s, Hubert’s kisses seem “far away and attainable.” The “different world” into which they dive is exciting at first, but not necessarily better.

“All relationships end badly,” Stamm told an interviewer once, and the remark is its own philosophy. Love is a temporary garment that rarely fits well. If there isn’t breaking apart, there’s death. While Jill and Hubert are both scripted to see the light, the light they do see is muted indeed, because “presence” in the world — in keeping with Stamm’s Ernst Bloch epigram — is rarely accomplish in full. Few craft and navigate tight spaces as well as Stamm. His is a literature of miniature houses in which the residents maneuver among the rooms.