All along the watchtower 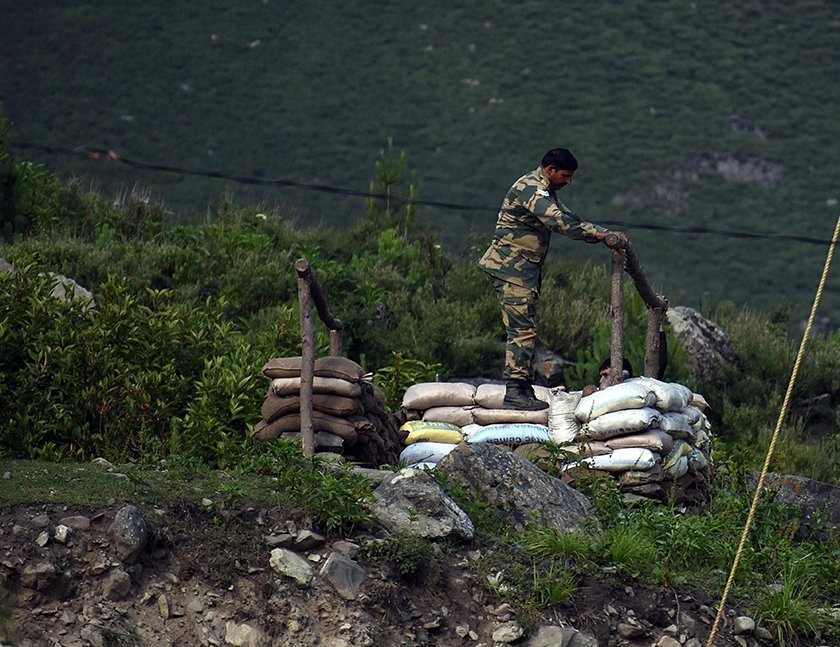 An Indian soldier erects a bunker near a checkpoint along the contested Srinagar-Leh National highway close to the India-China border.
W

hat do the snowy peaks of the Himalayas have in common with the balmy waters of the South China Sea? On the surface, not much. One is a warm tropical waterway, teeming with wildlife and natural resources. The other is a cold, barren tundra, devoid of almost any life. Yet despite these differences, the mountains are becoming more and more like the sea. Not physically but geopolitically, as both are now strategic battlegrounds in China’s quest for regional domination. And this growing similarity is something that India needs to change.

The border skirmish between India and China that occurred in mid-June 2020 in the Himalayan region of Ladakh on the eastern side of Kashmir was the culmination of weeks of increasing tension and military mobilization on both sides. This conflict, mislabeled a “skirmish”, was really a full-on battle between hundreds of armed soldiers on both sides. Although not armed with firearms, as per a decades-old agreement, they did brandish nail-studded clubs, knives, rocks, and their own hands. The death of 20 Indian soldiers and an undisclosed number of Chinese soldiers in what was essentially hand-to-hand combat is a good indication of the ferocity and intensity of the battle. Although both sides have now reportedly pulled back from the conflict zone, the significant loss of life, the first in decades on the India-China border, has deepened the long-held animosity between these two countries. 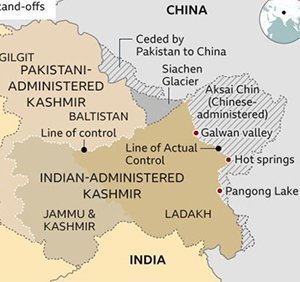 Border skirmishes and battles between India and China are nothing new, they have happened almost continually for over 50 years now in numerous spots along the 2,500 mile border. But now we are starting to see important parallels between Ladakh and the South China Sea. Parallels that cannot be ignored.

First, both conflicts began with seemingly innocuous construction projects. This most recent conflict in Ladakh was reportedly sparked in part by the erection of an observation tent and associated structures by the Chinese military. Not even an entire building, but a tent. The problem was that the tent was on territory long controlled by India, thereby spiking tensions.

At first glance, a tent may not seem worth so much trouble. But with the establishment of a simple tent, the Chinese were making an aggressive statement that they do not intend to observe the practices that have long governed the region and were undoubtedly testing the limits on what they could get away with.

This is the way it goes when China wants to expand its domain and make claims to disputed or international territory. It may be hard to remember now, but China’s efforts to control the South China Sea took a turning point in 2013 with the construction of a single artificial island in the Spratly island chain. After decades of skirmishes and conflicts with other Southeast Asian nations over the territory, China simply took matters into its own hands and started construction.

In the beginning, China claimed forcefully that the island was for peaceful and civilian purposes. By 2015 though, just two years later, things had changed dramatically. With little practical pushback from the international community, China accelerated island construction in the South China Sea and then, predictably, started building military infrastructure on them. To this day, the existence of the artificial Chinese islands in disputed territory has only heightened tensions and led to a global crisis.

The construction of a military outpost in Indian-controlled territory is the first “artificial island” of Ladakh. Without an aggressive response, China will again feel emboldened to continue such construction and slowly encroach. This is why even the erection of an observation tent was an encroachment that the Indian government could not ignore.

With the establishment of a tent, China stated that it will not observe the practices that have governed the region.

Part of the crisis stems from the fact that the territorial claims in the South China Sea have never been satisfactorily adjudicated, which is the second important parallel to Ladakh. For decades, the countries of Southeast Asia fought with China and each other over rights and access to the waters. International boundaries were either undefined, undemarcated, or meekly enforced. This uncertainty allowed China to lay claim to a broad expanse of the Sea with their “Nine-Dash Line”. Although the line was originally introduced in 1947, China’s development of significant naval capabilities in the last twenty years gave it meaning. China has taken advantage of the lack of fully demarcated borders to broaden its territorial claims.

Similarly, the Line of Actual Control, which serves as the de facto border between India and China is poorly defined, especially in Ladakh. Many of the skirmishes between the two countries occur because of disagreements over where exactly the line runs and what should be on either side. In the latest conflict, we can see China again taking advantage of this uncertainty. By claiming that parts of Indian-controlled territory are “disputed” and engaging in construction on this territory, China justifies its encroachment, despite the reaction of the international community.

This lack of disregard for international condemnation or opinion is the third important parallel between the two battlegrounds. In the South China Sea, China has long dismissed, disdained, and disputed international reaction. In 2016, China outright ignored the findings of an international tribunal that it had no historical claims or rights to the waters contained in the Nine-Dash Line. Without any enforcement mechanism from the tribunal or the international community, China continued with its activities in the region unabated.

Similarly, China has proven itself impervious to international reaction in Ladakh. When it became clear that China had provoked the Indian Army with its encroachment, the international community expressed strong condemnations of China’s move. International public opinion swung behind India. But this didn’t deter the Chinese. For weeks, they made no effort to reduce tensions and continued to make the claim that the Indian Army had willfully crossed the Line of Actual Control on its own. Even as tensions now cool a bit, China continues to disregard international opinion.

Even with all these similarities, there are still important differences between the two regions. The tension over Ladakh does not compare (in degree) with the tension over the South China Sea, and there is hope that it will not turn out the same.

This hope stems mostly from the fact that India is not Malaysia, or the Philippines, or Vietnam, or any of the other Southeast Asian countries tangling with China over water rights. India, perhaps alone in the world, has both the political will and the military capability to stand up to and withstand China. In fact, both are growing steadily. In this regard, this is not the India of the 1960s or the 1970s, or even the early 2000s. India demonstrated this amply in its response to China in Ladakh and in its forceful response to Chinese incursion near Sikkim in 2017. We can see that any action by China will now be met just as forcefully from India.

India alone has both the political will and the military capability to stand up to and withstand China.

Just as importantly, China has now met an Indian government that cares almost as little for international opinion as Beijing does. Since coming to power in 2014, Prime Minister Modi has carried out a hard right agenda that has trampled on the civil rights of millions of Indian citizens, including legislative action that courted extreme controversy in Kashmir itself. Despite the horrified reaction of the majority of the international community, the government has unapologetically soldiered on. This means that, similar to China, India will for now feel unconstrained by international opinion and will engage China however it sees fit. This also means that India, unlike other Southeast Asian nations, will be extremely unlikely to go for an international tribunal or UN mediation. When confronted, it will take matters into its own hands.

So the South China Sea carries important warning signs for both India and China. For India, the lesson is that you can’t give China an inch, for they will exploit it to the fullest. India must remain ever vigilant. For China, the lesson is that its tactics in the South China Sea are unlikely to work in Ladakh given the adversary’s size and might. In India, China has likely met its match.

Ladakh has unfortunately started to resemble the South China Sea. One can only hope that the outcome this time is different.

This is the author’s final column.