All about the crunch 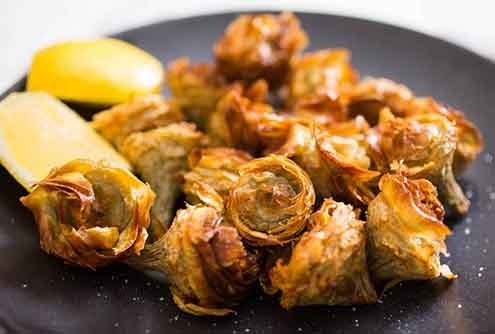 In carciofi alla giudìa, artichokes are completely immersed in hot oil, and fried twice.
I

recently asked a dear friend who is also a Jewish restaurateur and a fourth-generation Roman why the city’s Jews have always relied so heavily on fried foods. His reply was pithy, “Pork envy.”

In the city’s Jewish quarter, known simply as the Ghetto, fried foods abound. Local cooks created concia, or zucchine alla scapece — a twist on the Spanish word escabeche, for “marinade” or “pickle.” Sliced zucchini are fried, marinated in vinegar, chopped garlic and peppermint leaves. The fry-feast also includes filetti di baccalà (battered cod fillets), pezzetti fritti (nuggets of battered deep fried eggplant, squash, carrot and other seasonal veggies), and renowned carciofi alla giudìa — artichoke trimmed of their spiny ends and choke, completely immersed in hot oil, and fried twice. The first fry cooks the artichoke through, which is then lifted out with a slotted spoon and left to cool briefly while the oil heated even further. During the second fry, the artichoke opens like a flower, giving it a splendid copper hue and making it crisp and fragrant. Leaves are plucked off and eaten like chips.

My rule of thumb is to buy fish only in the two-three inch range. In fact, the marketing of other newborn catch – like immature herring, sprat, sardines, mackerel, and bass – is illegal. Depending on season and availability, classic Neapolitan paranza — always to be eaten piping hot — may include small codfish, triglie (red mullet), little sole (in Naples called fricassuàr) anchovies, and rock goby.

Moving from fish to pizza, Naples is also home to calzone fritto, a disk of dough filled with prosciutto, mozzarella, ricotta and Parmesan, folded over into a crescent shape, and then deep-fried.

The montanara, meanwhile, are two-inch discs of fried pizza dough dabbed with tomato sauce, grated cheese and fresh basil. This is street-food fried in vats of boiling lard. Yes, lard.

Fritto misto all’italiana is a deep-fried platter including mozzarella in carrozza (a fried cheese sandwich made with mozzarella, hello!), fiori di zucca (squash blossoms filled with cheese and an oil-packed anchovy, then battered and fried to a golden crisp), olive ascolane (large green olives pitted, stuffed with ground pork, beef and veal meat, then breaded and fried), fried sage leaves and even fried pastry cream called crema fritta. Fried pastry cream is a Mardi Gras Veneto specialty elsewhere served as dessert. In Bologna it has a host of pairings, including quartered and deep-fried artichokes, breaded potato croquettes, battered cauliflower and zucchini.

In Italian, the verb dorare means “to gild,” in cooking terms the act of coating in flour and frying lightly. Alici dorate is a delicious (and easy) recipe for fresh anchovies. I add a fistful of polenta to the flour for extra crunch. I toss the fish in a sealed plastic bag for even coating, discarding excess flour and frying the anchovies in hot peanut oil.

Sicily offers rice balls, arancine or arancini, an architecturally complex snack. Pear-shaped with elaborate fillings, the classic breaded and deep fried rice croquettes are about the size of a fist and traditionally contain meat ragout, mushrooms and stewed peas. Outside Sicily they are almost always made with creamy saffron risotto and shaped into round orbs the size of oranges (the noun arancino means, small orange). In Rome, these rice-flavored bombs change name, shape and filling: bullet shaped supplì are made with ragout-flavored rice, chicken gizzards and conceal a heart of hot mozzarella. Once a leftover, rice croquettes are now a gourmet item with a host of new fillings

To make sweet and sour sarde in saor, Venetians fry sardines before pickling them with onions, bay leaves, juniper berries, pine nuts, sultanas and vinegar. It’s a 14th century recipe that depended on pickled fish for long stretches out at sea. Though eaten year-round, sarde in saor are traditionally associated with annual Festa del Redentore, a religious celebration held the third Sunday of July.

Anything alla Milanese implies the food has been dunked in beaten eggs, dredged in breadcrumbs, and deep-fried. Cotoletta alla Milanese is a savory lean and boneless cutlet of veal, usually taken from the rib, pounded flat, breaded and fried in a combination of frothy butter and olive oil.

Italian fried foods are fun, light and crisp. Above all they’re traditional and in some way celebratory. They should never taste oil-logged, slippery or greasy. As a trick, Italian homemakers fry their batches in advance and then keep the fritto warm in the oven. In the end, it’s all about the crunch.