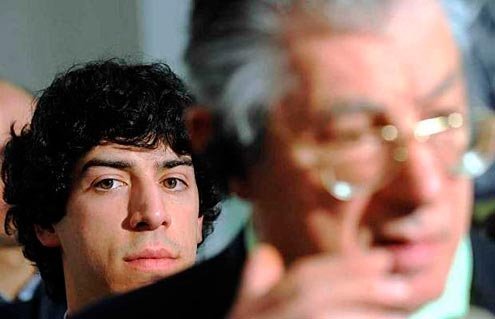 In mid-2012, magistrates said they suspected that Renzo Bossi's British education was paid for by Lega Nord funds and that he was also given use of two party cars for private use.
A

s the world’s 10th-largest economy (third largest in the European Union), Italy is a country to take seriously. It is a production machine, exporter of luxury goods, of food delicacies (Parma ham, Barilla pasta and Parmigiano, to name a few) and a tourist hot spot throughout the year.

You would think this means that the kids are doing all right in Italy. You would think there’s an abundance of jobs for the young. But you’d be wrong. When it comes to jobs, Italy plays with a stacked deck rigged in favor of its protectionist establishments. It is a country where family perks are normal if not expected.

Nepotism is an Italian invention. Family ties as a means to ensure employment has existed for centuries. In fact, the word nepotism comes from the Italian nipoti, nephews, and was coined in medieval Rome. It referred to how popes systematically gave senior clerical roles to their nephews (or in some cases, their illegitimate children).

Today, nepotism is a deeply rooted cultural norm. Favors between family members are common. Your last name often comes ahead of your skills. The concept of meritocracy, work based on merit, is hard to come by.

In a recent interview with the BBC, Roberto Perotti, a professor of economics at Milan’s Bocconi University, suggested Italian nepotism had its roots in family distrust of outsiders. Since family members expect bloodline loyalty, populating the workplace with kin seems like natural choice to many, representing a kind of insurance policy.

This has led Italian media to coin a new phrase, Parentopoli, or “parentgate,” which is intended to draw attention to the growing number of institutions, including universities, with large numbers of professors and ranking officials who share the same last names. In 2008, Perotti published a book titled “L’università truccata” (“The Rigged University”) probing the problem, citing the concentration of the same surnames in a number of university departments throughout the country. The book was followed by a series of studies of nepotism at Italian universities.

At the University of Bari, for example, five families have held senior positions in the business and economics departments for years. Similarly at the University of Palermo, more than half the entire academic population has at least one relative working within the institution.

Perotti’s research also showed that between 2000 and 2010, there were 37 instances of sons or daughters hired or promoted during the terms of either a preside (head of faculty) or a rettore (rector), eight involving sons or daughters-in-law, seven of nephews, and three of spouses.

University officials, when confronted, are unapologetic. Take the rector of Rome’s La Sapienza University, Italy’s largest, who speaking during a live TV broadcast said, “In Italy we are not used to being meritocratic based on strictly objective criteria,” while at the same time denying the existence of nepotism. For a man who oversaw the promotion of his wife from a local high school history teacher job to professor of medical history and his daughter’s appointment as professor of legal medicine (without any specific medical education), both at the school he ran, talking about strictly objective criteria is an understatement. He denied the nepotism charges by saying his family members simply happened to be the best qualified.

Though you might not think it after hearing these case studies, Italy’s high court has actually ruled nepotistic appointments as illegal, at least in Italy’s public sector. But so far no one has ever been successfully prosecuted on such charges. The reason for that may be the degree to which nepotism runs rampant among magistrates and judges, and in the judiciary as a whole.

Making matters worse, nepotism has been getting even worse since the onset of the euro crisis. It is not beginning to have a major affect on private companies. A recent labor ministry study recently suggested that 61 percent of Italian firms rely on personal introductions for recruitment, up from 50 percent a year earlier.

Few have been able to tackle this issue politically. Roberto Giacchetti, a Democrat Party deputy, has tried. The BBC reported that he went on a hunger strike last year to demand that parliament approve electoral reform, which is also littered with family intrigues. Like other such strikes he’s undertaken, it came to nothing. That’s not surprising since under the Italian electoral system, voters choose parties, not candidates. Some politicians use this to give relatives parliamentary seats. Renzo Bossi, the politically ambitious son of Northern League founder Umberto Bossi, resigned along with his father in mid-2012 as a financial abuse and nepotism scandal hit the roots of the party.

If politicians don’t back legislative change demanding hiring on the basis of merit instead of last name or family connections, who will?

No one doubts the magnitude of the problem. But reform is essential, and the demand has to start from the public. In my previous column, I lamented Italy’s lost generation, how Italy is losing its brightest and boldest to the financial crisis. Compound that with the persistence of nepotism and Italy seems stuck in medieval times.

In his 2008 book, Perotti all but begged Italy to consider investing in “human capital, which will be repaid,” but the recommendation went unheeded. Unless these stubborn tendencies are overturned, the country will face difficult days ahead, no matter who governs it.