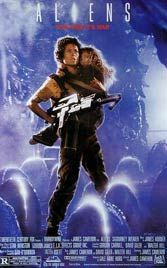 Fresh off the literally explosive success of “The Terminator,” director James Cameron decided to militarize the “Alien” franchise and delivered an exceptional sequel chocked with vim, vigor and monster-mash hiss. Based on start-to-finish pace, this is his best movie.

Ellen Ripley (Sigourney Weaver), the last survivor of the doomed freighter “Nostromo,” awakens after 57 years of induced sleep to discover that the greedy Corporation has colonized the Alien planet.

Stricken by fiendish nightmares, she agrees to accompany a military expedition to see if the colonists, who have gone silent, are in trouble. They are. Cameron emboldens his space Marines with an Earth-like strut. Cakewalk, they think. It’s not. The planet is already decimated.

Suspend disbelief and this is full-throttle science fiction every bit as unsettling as the original, though heavier on martial arts. Cameron is constantly on the offensive and makes even the maudlin engaging, giving irony and wisecracks some leg room. Seeing this beside the likes of “Avatar” makes you pine for the days when directors were more entertained by wit than gadgets.