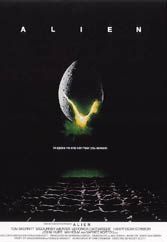 Science fiction’s formal entry into the pro-choice debate. Stuck briefly on an uncharted planet, the crew of the freighter “Nostromo” picks up an unwanted guest that makes itself unpleasantly at home. Director Ridley Scott’s admonishing universe is a trucker alley spiked with oblique doses of Freud, Conrad and Hitchcock.

Add character depth and haunted-house anxiety and you get a sci-fi horror flick that reworks the genre by complicating fear. The alien, while visually astounding, comes as much from the within (literally and figuratively) as from the “out there,” adding a second, fecund layer of discomfort. As the film moves forward, sexuality slips into the claustrophobia: valves break; clothes are shed; you squirm. And even that’s not enough to gain clearance.

Young Sigourney Weaver as Ripley goes to places where no space women has gone before or since. Though the “Alien” franchise plods on (or threatens to; four sequels in two decades), nothing remotely approximates the out-of-nowhere original, which London Time Out rightly called a “Freudian machine gun.” It’s about how evil exists, and space races mix at their own peril.