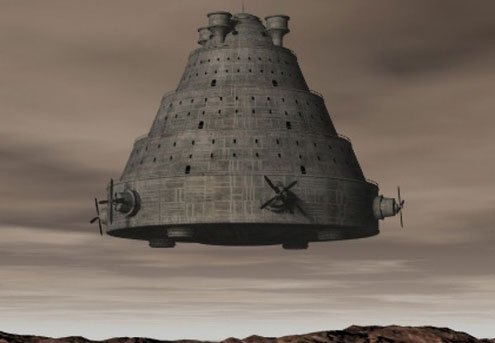 wo weeks ago I finally took my belated holiday to visit my sister at our family home in Cittadella near Padua. On our first night, over pizza and beer, the conversation drifted to religion and age-old beliefs. She soon began talking about the ancient astronaut theory, which has received considerable attention since the History Channel began airing its “Ancient Aliens” documentary series, something she’s been following closely.

Hearing the words aliens, I immediately conjured up one-eyed green creatures and laughed it off dismissively. My sister wasn’t phased and insisted I watch an episode. I sat back in amazement. Incredibly, much of what was said actually made sense to me.

According to ancient alien theorists, extraterrestrial beings landed on Earth thousands of years ago. Their aim was to provide early civilizations with a superior knowledge of science. The theory grew from an enduring belief that life exists on other planets, and that aliens and humans have crossed paths before. The notion was popularized by Swiss author’s Erich von Däniken’s 1968 bestseller, “Chariots of the Gods? Unsolved Mysteries of the Past,” which suggested that beings from other planets — the ancient astronauts or aliens — visited Earth regularly. In these visits, they taught humans the rudiments of technology and influenced ancient religions. Though he’s often been debunked, many see von Daniken as the father of ancient alien theory.

While some inevitably consider it complete mumbo-jumbo, the evidence that books such as von Däniken’s and the “Ancient Alien” documentary series suggests is nonetheless fascinating. Both book and TV series point to ancient religious texts that depict humans as witnessing the descent of gods from the sky in vehicles resembling spaceships and possessing spectacular powers. Other evidence includes ancient artwork and architectural marvels such as the Mayan ruins and the Egyptian pyramids. The History Channel series goes into considerable detail — it is now in its fifth season — and contains interviews with experts from all walks of life, including master builders, art historians, architects, and anthropologists.

I’ve always wondered about the genesis of architectural marvels, Stonehenge and the Egyptian pyramids among them. Is it really possible that human beings bereft of even the most basic technology designed and built such perfect structures? I’m not so much astounded by their beauty but by the sheer perfection of their design and making. I find it almost impossible to believe that barehanded humans were able to lug stones and other heavy materials, some weighing thousands of tons, to create such perfect structures. Did ancient aliens play a role? The evidence in their favor is at least suggestive.

Polynesia’s Easter Island is the home of the famous “Moai” statues, 887 giant human figures with enormous heads that “guard” the coastline. The statues stand between 20 and 33-feet high and weigh up to 86 tons (one unfinished sculpture would have been nearly three times that height and weight). Considering the modest engineering and transport skills that humanity possessed between 1200 and 1500, when the sophisticated monolithic statues were erected, it’s hard to connect them to a manmade project, particularly since the quarries that provided the stone were mysteriously abandoned.

Other examples suggest that ancient aliens may have introduced humans to aircraft. Mythical flying machines called “vimanas,” mechanical birds, are mentioned in ancient Sanskrit epics written in India more than two millennia ago (“Dark the descent: the birds are golden-colored; up to the heaven they fly robed in the waters…”) Ancient alien theorists point to similarities between these descriptions and later reports by people who claim to have seen extraterrestrials. This theory would suggest that India entertained extra-planetary astronauts in ancient times.

The Nazca Lines represent another intriguing case in point. A series of ancient designs, they are etched into a high plateau in Peru’s Nazca Desert and include drawings of animals, birds and humans, some measuring 600-feet wide. Given their colossal dimensions, these figures and designs can only be fully appreciated from a high altitude. At the same time, there’s no evidence that Nazca people, who lived in the area between 300 B.C. and 800 A.D., invented flying machines. Alien theorists say the figures were used to help guide spaceships as they approached their landing points, with the lines serving as beacons or runways.

These are only a few examples of historical structures, artifacts and writings the theorists use to fortify their often scoffed-at theories. I’ll be honest: The examples convince me far much more then sightings of Gods, angels and similarly mythical observations tied to a faith and religion. Maybe God was an alien and explained to earth-dwellers as such.

My sister and I spent the most of the week discussing the theories over dinner and wine. She’s never been convinced of a Christian God, so her sights are set on the alien theory as a more persuasive explanation for certain segments of human progress.

As for me, I’m likely to do a lot more research on the subject. It’s always worth trying to find out if there’s any truth to what some, perhaps rightly, call a conspiracy theory. That conspiracies exist gives greater weight to human speculation and skepticism about assumed truths, which is hardly a bad thing.