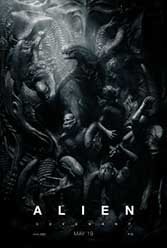 Five years after the ambitious if cryptic “Prometheus,” Ridley Scott returns to his seminal “Alien” franchise with shock and awe enough to resonate both among fans of deep space’s most terrifying monster and those intrigued by the “new race” subtext of the 2012 “Prometheus” installment.

The opening premises are old school enough: it’s the year 2104 and the colonizing earth vessel “Covenant” is headed for a distant planet when a solar storm wakes the ensemble cast crew from their cryogenic slumber. Amid the chaos, a seemingly hospitable planet appears from nowhere. So why not head there? One crewmember plays the sage. “It’s too good to be true.”

Indeed it is. Turns out the planet is lorded over by marooned but high-minded android David (David Bowie, aka Michael Fassbender), a provocatively sinister Doctor Moreau-cum-Josef Mengele creation who first cropped up in “Prometheus” as a maverick droid intent on tinkering with the primal forces of the universe. After a decade’s worth of genetic no good conducted in the bowels of the “too good to be true” world (on which the “Prometheus” vessel crashed), he’s ready to spring his toothy minions on the visitors and their own droid Walter (Fassbinder with a drawl).

Fassbender’s David is an erstwhile SS commander who transmits the androgynous sexual menace of Stanley Kubrick’s HAL computer. “Undeserving” humans are not at all his Aryan cup of tea, “a dying species begging for resurrection…” So why not put his blood-curdling predators in their place?

Scott uses this “mad droid” theme to displace corporate Alien-makers as the franchise’s bad guy, or guys. Cometh the slaughter and the fight-back, with feisty women (as always a step ahead of men) trying but failing to imitate the indomitable and original Sigourney Weaver as chief Alien-slayer (the 1978 original played out as a psychological thriller).

The crew performances are perfunctory, fair enough since all that really matters is Fassbender’s deeply disturbing David, his clinical determination at the center of memorably unsettling final scene.