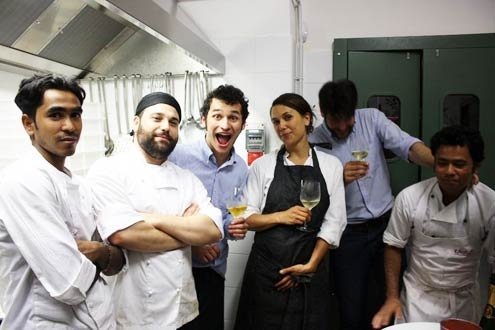 Alice Delcourt, center right, and her staff.
A

shaded terrace with an organic garden swept by a cool breeze doesn’t sound much like Milan in summer. But Alice Delcourt’s new Wednesday-through-Sunday restaurant, Erba Brusca, on Naviglio Pavese (Canal of Pavia), is every bit atypical, as my friend Maggie and I found out one brutally hot day at lunch.

Outside the restaurant, the first thing we saw was a row of bikes. It turns out environment-oriented Alice loans them out to clients for a ride along canal. Pedal in on your own bike and she gives you a discount on the meal.

Inside, floor-to-ceiling shelves are packed with natural, organic and biodynamic wines, many from my favorite producers (including Ar.Pe.Pe, Elizabetta Foradori, Grosjean, Bartolo Mascarello, Montevertine, Cavallotto, and Cave de Morgex.) But many labels were new to me and I was eager to try a few.

We sat in the back terrace overlooking the garden, where an unexpected breeze took the edge off the city’s sweltering heat. The overall feeling combined earthy California, rustic France, and chic Italy. Flowers and vegetables bloomed in the garden, whose red lounging chairs and bright red cushions were a nod to Italian design. The restaurant’s tables and chairs had a Parisian café flavor.

None of this is by chance. Alice was born in France to a British mother and a French father. She grew up and attended college in the United States and worked in restaurants in New York and London before moving to Milan eight years ago. Since then, she’s fully embraced Italy’s “zero kilometer” philosophy (which favors so-called low impact foods, including meats, cheeses, grains, and honeys) and the organic food movement that began with Alice Waters. She bases her cooking on what’s fresh and available, adding her own flair to whatever she finds.

The salad called for sparkling wine (spumante) and I chose Faccoli Franciacorta Extra Brut DOCG (€18/bottle) for Maggie and a glass of Bele Casel Prosecco Extra Brut Asolo DOCG (€12-13/ bottle) for me. The difference between the wines was immediately visible. True to form, the Faccoli Franciacorta had the deeper color. Franciacorta comes from champagne grapes (in this case chardonnay but often pinot noir) and is made with the champagne method, metodo classico, in which the second fermentation (which adds the bubbles) occurs in the bottle (two of my previous columns, Bubblicious and Bubblicious II, cover this topic).

Prosecco, on the other hand, comes from prosecco (glera) grapes and is usually made according to the metodo charmant in which the second fermentation occurs in large pressurized vats. The Bele Casel Prosecco Extra Brut was lighter in color, taste and fizziness.

Both producers are organic and artisan. Faccoli is near Brescia in Lombardia in the heart of Franciacorta. They make “brut,” “extra brut” and “no dosage” versions of metodo classico spumone. Bele Casel is in Asolo (Colli Asolani), one of the three recently designated DOCG Prosecco Superiore zones in northern Veneto. (The others are Valdobbiadene and Conegliano).

After the salads, Maggie had quiche and I chose asparagus with soft-boiled eggs. Each of us had a glass of Alois Lageder Pinot Bianco 2011 (€13-15/bottle). This dry white from Alto Adige is made from the pinot bianco (or pinot blanc) grape variety, a clone of pinot grigio (pinot gris), which is in turn a clone of pinot nero (pinot noir).

In the 19th-century, pinot bianco was planted widely in Burgundy and was often confused with chardonnay, though the two varieties are unrelated. The Lageder Pinot Bianco was crisp and clean, but with light, mature fruit flavors (apples and pears) that typify chardonnay.

Dessert was sliced peaches and homemade oatmeal cookies, the real American kind. We chatted with Alice before leaving, who was busy organizing and directing in Italian while talking to us in colloquial American English. She’s a creative genius whose chosen art form is organic food and wine. In “Erba Brusca,” she’s created a Milan oasis.